Continuing our series revisiting deconstructivist architecture, we profile Frank Gehry, the Canadian architect who brought global attention to the style with the ground-breaking Guggenheim Museum in Bilbao.

Opening in 1997, this gleaming composition of titanium-clad, ship-like forms – described by the New York Times as a "miracle" – transformed the economic fortunes of the previously unremarkable Basque port city, and catapulted Gehry and his idiosyncratic style to international fame.

Soon, cities across the world were clamouring for their own spectacular architectural icons, chasing a phenomenon that became known as the "Bilbao effect".

It is often credited with birthing the era of the starchitect and a slew of cultural buildings that would forever be associated with deconstructivism, often criticised for prioritising computer-generated form over function.

The phenomenon saw Gehry become perhaps as close to a household name as architects can get. In 2005, he even made a guest appearance in an episode of The Simpsons, where, scrunching up a letter inviting him to design a new concert hall for Springfield, he is suddenly struck with inspiration to create one of his characteristically "crumpled" forms.

While Gehry himself has maintained a somewhat indifferent attitude to this Bilbao-induced stardom, the frequent criticisms of his architecture as being simply about spectacle and appearance have followed much of his work since.

At a press conference in 2014, he infamously responded to this criticism by raising his middle finger, saying how 98 percent of what gets built today is "pure shit" with "no sense of design".

Gehry's divisive aesthetic, labelled everything from "disordered" and "chaotic" to "unfinished", is one frequently associated with deconstructivism. He was one of seven architects that was featured in the seminal Deconstructivist Architecture exhibition at New York's Museum of Modern Art (MoMA) in 1988.

But rather than being tied to philosophy or theory like the work of many of the style's proponents, it was an approach informed specifically by the context of Los Angeles, where his family emigrated from Canada in 1947.

Having studied at Los Angeles City College and the School of Architecture at the University of Southern California, Gehry briefly moved to Cambridge to study urban design at Harvard, but left to return to LA and join the office of Victor Gruen Associates, where he would work on his earliest designs including David Cabin in Idyllwild.

In 1967, he established his own office, Frank Gehry and Associates (now Gehry Partners), during the heyday of California's Funk art movement. This style, drawing on the found object art of Robert Rauschenberg and Jasper Johns, often incorporated everyday objects into paintings and sculptures.

Gehry, who has sometimes described his building as akin to jazz music, was drawn to this mindset, which in his early buildings informed the use of cheap, often unrefined and ubiquitous materials, such as metal mesh fencing, corrugated panels, and timber.

Nowhere was this more visible than in a building that is the complete opposite of the glitzy cultural commissions of the 90s – the Gehry Residence, which he designed for himself and his wife Berta in Santa Monica in 1978.

This project, which had a budget of just $50,0000, was an extension of the family's Dutch colonial home in the LA Suburbs where they live to this day.

Gehry made use of scrappy "junk" materials to contrast the existing home, enlarging and extending its spaces with corrugated metal forms and timber, glass and mesh canopies that seem to crash and collide through its form.

The house captured the imagination of the architectural world, but less so Gehry's neighbours, who he recalled were "pissed off" by the scheme.

"Two doors south of me was a lawyer. She complained to the city and filed a lawsuit," he said in an interview with PIN-UP magazine.

Philip Johnson and Mark Wigley would include the project in the 1988 Deconstructivist Architecture exhibition.

It was perhaps the example most closely aligned with Wigley's own description of deconstructivism's visual aesthetic, which he explained as being "as if some sort of parasite has infected the form and distorted it from the inside."

He went on to describe the new additions to the Gehry Residence as having "emerged from the inside of the house… as if the house had always harboured these twisted shapes within it." 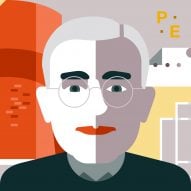 Peter Eisenman is the deconstructivist theorist

Also included in the MoMA exhibition were unbuilt designs for the Familian House, also from 1978, featuring solid, cuboid forms intersected and disrupted by twisting frameworks. "Pure form is interrogated in a way that reveals its twisted and splintering structure," wrote Wigley.

The Santa Monica house also caught the attention of the philosopher Frederic Jameson, who in his 1991 essay Spatial Equivalents in the World System offered an analysis of the building as having "some powerful claim on revolutionary spatiality."

While the home was hailed as an important work in intellectual circles, its cheap materials were reflective of challenging realities for the fledgling practice, which was steadily building a reputation through local, commercial projects such as the Santa Monica Place Shopping Centre, Edgar Retail Complex, and private house commissions.

Through the 1980s, the firm's forays into cultural architecture began to accelerate with several high-profile schemes in California including the Cabrillo Marine Aquarium and California Aerospace Museum.

The budgets may have grown but Gehry's formal and material preoccupations and "collage" aesthetic remained apparent, with the Cabrillo Marine Aquarium featuring wire mesh canopies and the Aerospace Museum appearing as a stack of contrasting block-like forms.

A 1989 project for a production hall at the Vitra Design Museum marked a shift, however, with Gehry using white plaster and titanium-zinc alloy to create one of the earliest examples of the sculptural style that would come to define his career.

This series of projects culminated in Gehry receiving the Prizker Architecture Prize in 1989, for what the jury described as a "sophisticated and adventurous aesthetic that emphasises the art of architecture."

It was a win that in 1991 put Gehry in good stead to see off competition from Arata Isozaki and Coop Himmelb(l)au and be chosen to design the Guggenheim Museum Bilbao, which completed in 1997.

The curvilinear forms seen in the Vitra Design Museum Project were here developed and expanded, clad completely in tens of thousands of titanium panels and made possible through an early use of computer-aided design.

For all the subsequent talk of spectacle over function, the Guggenheim Bilbao was a highly considered design, creating a dramatic new relationship with the city's waterfront and challenging the idea that gallery spaces all need to be white cubes with a series of dynamic and angular interiors.

"People are always telling me how I changed the city," he said of the project in a 2021 interview with Dezeen. "I didn't mean to change the city, I just meant to be part of the city."

But change many cities he would, with large-scale cultural, commercial, and housing projects soon popping up across the globe.

At first, many of these were visually similar to the Guggenheim Bilbao, none more so that the Walt Disney Concert Hall (commissioned prior to Bilbao but completed after ,in 2003). The Richard B Fisher Centre in the same year and the 2006 Hotel Marqués de Riscal in Spain also featured sweeping, metal-clad curves.

Gehry's first forays into the UK came with the more pared-back Maggie's Dundee in 2003. In 2008 he was selected to design the Serpentine Pavilion in London, which appeared as something of a return to his roots with a crashing form of wood and glass that alluded to his early domestic projects.

In 2011, Gehry completed his first skyscraper in New York at Eight Spruce Street, with a crumpled, wave-like facade typical of other housing schemes such as the 2011 Opus Hong Kong, most recently seen, albeit in a more toned-down way, at a project alongside Battersea Power station due to open in September 2022.

Despite frequent criticisms of repetition, Gehry's oeuvre features some striking departures. The 2000 Museum of Pop Culture in Seattle is a slight dabble in the short-lived style of "blobitechture", while the angular 2014 Biomuseo in Panama City swaps shiny silver curves for punchy, primary-coloured angles.

More recently, the 2014 Louis Vuitton Foundation in Paris, took the form of a series of giant glass shells, and a tower for the Luma Arles art centre is a gleaming combination of crumbled and cubic that is unmistakably – and controversially – Gehry.

Although Gehry would make attempts to describe these projects as related to their respective times and places – an argument he continues to make for his schemes – the criticisms of them as showy vanity projects would often emerge once they opened.

"I always want to hide under the covers when my buildings open… I'm terrified about what people will think," admitted Gehry in the 2006 documentary Sketches of Frank Gehry.

Writing in The Architectural Review, Peter Buchanan wrote how many of Gehry's buildings "flagrantly disregard their settings, reducing architecture to mere superfluous spectacle," criticisms that began to be extended to many deconstructivist works.

But bar the occasional press conference outburst, Gehry and his spectacular forms remain uncowed by these criticisms. Now 93, working in an era in which the Bilbao Effect and iconic buildings are regarded with far more suspicion, Gehry's career has taken him full circle as he works on the Guggenheim Abu Dhabi.

The new landmark – that will jostle for attention on Saadiyat Island with Jean Nouvel's Louvre Abu Dhabi – features a characteristic collage of block-like forms, curved metal sheets and jagged canopies, forming a lineage back to the Santa Monica house where it all began.