California-based industrial designer Reiten Cheng has developed a recycling machine that can be 3D printed using open-source instructions and used to turn PET bottles into filament for additive manufacturing.

Polyformer was designed to make it cheaper and easier for independent makers to create products from repurposed waste materials instead of relying on virgin plastic.

The design is open source, meaning that a step-by-step manual detailing its construction is freely available online so that it may be used and adapted by others.

The L-shaped gadget is made from 3D-printed parts combined with a few off-the-shelf components found in traditional 3D printers.

"The entire machine was printed using recycled PET bottles, which gives a nice translucent look to it," Cheng said.

Polyformer is equipped with a slicing tool with stacked bearings that can cut plastic bottles into long, continuous ribbons.

Users can feed these ribbons into a so-called hot end, which heats, melts and feeds the thermoplastic through a brass nozzle to create a filament with a diameter of 1.75 millimetres.

The end of this filament can then be mounted onto a motorised red spool, which will pull the rest of the ribbon through the hot end and wind up the filament as it is created. Once the spool is full, it can be taken off to be mounted and used in a 3D printer.

Polyformer has a modular design that allows users to easily swap out parts and modify the machine to their liking.

Since making the project public last month, Cheng said there are now around 130 people in Polyformer's community on social media platform Discord, who have machines under construction.

Some users have proposed adding grinders so that the machine can recycle different kinds of plastic waste, while others have suggested recycling cassette tapes and fabrics. 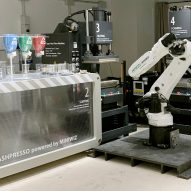 Polyformer follows on from a number of other open-source projects, such as VoronDesign's 3D-printed 3D printer and the Recreator3D pultrusion kit.

Together, Cheng says these kinds of machines could eventually help to forge a decentralised system of manufacturing and recycling.

"I am imagining a future where products can be manufactured at home or in a community centre and be recycled into things at the end of their life that can be used again to manufacture new products right on-site," Cheng told Dezeen.

"The technology might not be there yet but I believe it's not far from possible if we keep developing and implementing it as a community."

Last year, a number of architects including Bjarke Ingels collaborated on an open-source project to make 3D-printed coronavirus face shields for hospital workers.

Ingels argued that the pandemic has revealed "the shortcomings of the traditional supply chain" and that decentralised local manufacturing could replace global supply chains.

The photography is by James Chou.