Microsoft has created a kaleidoscopic new version of the Pride flag that represents 40 different LGBTQIA+ communities and can evolve to include even more.

Microsoft, which says the project was created by its LGBTQIA+ staff, released an earlier version of the flag during Pride month in June and has now updated the design and made it open source.

Images of the flag and its related assets are available for download through GitHub and Figma under Creative Commons licenses. This means people can not only access and use the finished file but edit and add to it to create their own version.

"We've long been believers in the power of democratic design – in people coming together to define their own narratives and futures – and we were so inspired and humbled by the global response to the flag design that we want to share it beyond our own borders," Microsoft's director of brand activation Aleksey Fedorov wrote in a Medium post.

"By open-sourcing it, we're eager to see how you remix it as a way of continuing to create and define the future of our movement."

Microsoft's design incorporates elements of flags from 40 different communities including ones that are widely known such as gay, lesbian, bisexual, transgender, queer, intersex and asexual, which together make up the LGBTQIA acronym.

The flag also includes other newer or lesser-known gender or sexual identities, from abrosexual to nonbinary and polyamorous to trigender.

There is also a version that incorporates the "ally flag", for straight people who are supportive of LGBTQIA+ communities 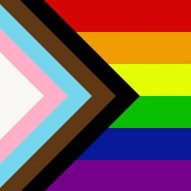 Each flag is interpreted as a triangular, paper airplane-like graphic that slots into the main image, in which all the flags fan out from a central point.

Microsoft has made the design available in multiple formats, including versions sized for laptops and phone wallpapers.

"We wanted to show how large our community is," said Andre Bazire, Microsoft's director of global advertising and one of the creators behind the flag. "Intersectionality, solidarity, unity – they are important, we need them more than ever."

The Pride flag was originally created by artist Gilbert Baker in 1978 to mark what was then called San Francisco Gay Freedom Day and is now known as San Francisco Pride.

The design featured eight different-coloured stripes – two more than are commonly used in the same flag today – creating a rainbow-like appearance that was meant to evoke a feeling of hope.

A popular update came in 2018 with Daniel Quasar's Progress Pride flag, which added black and brown stripes to represent marginalised communities of colour, as well as the light pink, blue and white of the transgender Pride flag.

Microsoft previously created a version of the Pride flag that represented 19 different communities in 2021 and applied it to various products and packaging.