Artists, architects and designers, including SO-IL, Tatiana Bilbao Estudio and Roman and Williams, have created numerous birdhouses as part of the For the Birds installation at The Brooklyn Botanic Garden.

The individuals and studios created the birdhouses, which range from the sculptural to the quaint, to be displayed throughout the 52-acre park at the Brooklyn Botanic Garden.

In total 33 different studios from a variety of backgrounds were asked to design birdhouses that respond to the specific habits of birds in the context of depopulation due to climate change.

"Climate change and the related destruction of habitat have led to a 30 per cent decline in birds across North America," said Brooklyn Botanic Garden CEO Adrian Benepe, citing a National Audobon Society study.

Architecture studio SO-IL – in collaboration Dalma Földesi, Jung In Seo and architectural fabricators Eventscape – used the opportunity to showcase technological know-how and create a clay birdhouse that resembles a skyscraper called A Palace for the Eastern Bluebird.

"Our excitement to participate stems from an interest in exploring an architecture for non-human life," said Florian Idenburg and Jing Liu of SO-IL. "The project uses robotic techniques to create a habitat for birds out of clay."

Designer Shun Kinoshita and architecture studio Charlap Hyman & Herrero teamed up to create a sculptural work made from nitrate, resin, plastic and paper that shimmers in green to both blends in and sticks out in the foliage.

Helene Schauer of Mexican architecture studio Tatiana Bilbao Estudio created a series of platforms with steel columns and terrazzo platforms that make up a "neighbourhood" for the birds.

Studios Bureau Spectacular and Kyle May Architect also designed for the crow but went in the opposite direction, building a 12-foot-tall (3.6-metre-tall) tower for crows.

Other designs dipped into the realm of classic birdhouses by designers like Tom Sachs, who contributed a simple red-and-white birdhouse with the cross symbol of ghlighs native Switzerland, which he intended as a refuge.

"To find home or shelter in Switzerland is the dream," Sachs said. "If those damn birds are so above it all, why not let them share our burden? Let's ground the birds in that reality."

Some of the designs relied on classic structures but made them even more elaborate, like the design by Stephen Alesch and Robin Standefer – from New York studio Roman and Williams.

The studio – frequent designers of hotels – said it is the "smallest hotel we've ever built".

Brooklyn-based artist Olalekan Jeyifous took the built environment of Brooklyn and shrunk it down to size with Birdega, a small blue-painted bodega – the corner stores found in Brooklyn that the artist says are disappearing due to gentrification in a way that reflects disappearing bird environments.

Artist Viktor Timofeev took a similar approach, creating a scaled-down model of the Soviet-era housing blocks in Riga, Latvia that he saw when he was a child growing up there.

As did artist Kevin Quiles Bonilla, who modeled a birdhouse on a Puerto Rican home.

While most of the birdhouses are on land, design studio Chen Chen and Kai Williams, created a floating platform for herons made from recycled plastic containers with billowing flags that sits on the Japanese-style pond at the garden.

The breadth of artists and designers who were invited to contribute aimed to represent diversity as apparent as the species of birds they referenced. 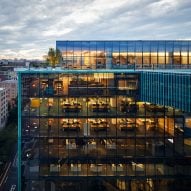 "We couldn't be more honored to invite such a talented group to create these pieces, which make for a whimsical and meditative experience for our visitors, and create awareness about all we need to do—collectively—for the birds," said Brooklyn Botanic Garden's Benepe.

The exhibition is part of a larger series celebrating birds organised by Musical artist Randall Poster, who also recorded a 20-track album with musicians and poets.

Other design based around sheltering birds includes a concept by BIG that saw a hotel room suspended and surrounded by hundreds of birdhouses and Dezeen has done extensive reporting into design that mitigates the harmful effects of glass and other features of the built environment on birds.

For the Birds takes place at The Brooklyn Botanic Garden until 20 October 2022. See Dezeen Events Guide for an up-to-date list of architecture and design events taking place around the world.

The photography is by Liz Ligon.