American artist James Turrell has created an immersive installation with a skylight surrounded by an illuminated ceiling inside a stone-clad structure on a forested slope in Colorado.

The Green Mountain Falls Skyspace is situated in the foothills of Pikes Peak, near Colorado Springs. The structure overlooks a lake and is surrounded by towering evergreen trees.

Conceived as "a harmonious extension of the landscape", the installation is housed within a cubic building totaling 676 square feet (63 square metres).

The structure has a metal roof and exterior cladding made of local stone. The foundation and walls were constructed using 1.5 million pounds (680 metric tons) of concrete, which were hauled up the sloped site.

"Construction of the Skyspace was a feat of engineering, with its exclusively Colorado-sourced materials transported up the side of the mountain," Turrell's production team said.

Green Mountain Falls joins more than 85 Skyspaces by Turrell around the world, from Argentina to Japan. It is the first Skyspace in Colorado and the first built on a mountainside.

The installations typically feature the use of natural and artificial light, along with colour and space, to create a "sky observatory" and an atmosphere of contemplation.

Inside, visitors step into a single, 18-foot-tall (5.5-metre) chamber with an oculus – the only window in the space.

The square aperture has razor-thin edges that produce a surreal effect, particularly when combined with the room's lighting scheme. The ceiling is illuminated by ever-changing hues emitted by LEDs.

The oculus can be opened or closed, depending upon the weather – making it one of the few Skyspaces with a retractable roof.

"Distinctive and rewarding viewing experiences are offered when the roof is open or closed," the team said.

The interior chamber's walls are wrapped in timber from local pine trees that were killed by beetle infestations. The floor – a mix of leather and finely polished granite – reflects the sky, which "is an important part of the artwork", the team said.

The ideal time to experience the Skyspace is at sunrise and sunset, although viewings are held at select times during the day. 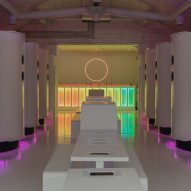 Visitors are invited to sit on heated, concrete benches and take in the experience. The space can accommodate up to 25 guests.

The building is accessed via a trail that begins in the centre of Green Falls. Those unable to hike can request a ride from staff members.

Turrell, who is a licensed pilot, began creating his Skyspaces in the 1970s.

The permanent installation opened in June to mark the start of the Green Box Arts Festival, an annual celebration of the visual and performing arts.

"An instant pilgrimage destination, Green Mountain Falls Skyspace will attract global art enthusiasts, first to Green Mountain Falls and then on a spirited trek through an entrancing conifer forest for the ultimate reward – a transcendent, sensory work of art," the festival organisers said.

Other projects in the Colorado Springs area include the US Olympic and Paralympic Museum by Diller Scofidio + Renfro, which is composed of aluminium-clad volumes arranged in a pinwheel formation, and a SOM-designed leadership centre at the US Air Force Academy, which features a protruding glass skylight that resembles the tail fin of a fighter jet.

The photography is by David Lauer Photography.