Skidmore, Owings & Merrill has completed a new building on the grounds of the US Air Force Academy in Colorado, featuring a glass skylight resembling the tail fin of a jet fighter that points towards the North Star (+ slideshow).

The Center for Character and Leadership Development (CCLD) is situated on the historic campus of the US Air Force Academy, located just outside of Colorado Springs. The Academy trains students to be officers in the Air Force.

Global architecture firm SOM first masterplanned the campus in 1954. Celebrated for its Modernist style, the academy was designated a National Historic Landmark District in 2004.

Encompassing 46,000 square feet (4,273 square metres), the new facility serves as an education and research centre that supports the academy's mission to "integrate character and leadership development into all aspects of the Cadet experience".

The single-storey facility was placed below an existing podium punctuated with several notable buildings, including the famous SOM-designed Cadet Chapel. Composed of 17 spires clad in aluminium and coloured glass, the 150-foot-tall (46 metres) chapel resembles a line of fighter planes ready for take off.

The leadership centre is meant to complement the chapel. "The CCLD creates an architectural focal point for the campus and serves as a counterpoint to the Academy's iconic Cadet Chapel," said SOM, a global firm founded in 1936.

One of the new facility's most distinctive features is a 150-foot-tall (46 metres) truncated oblique pyramid that serves as a skylight. It rises from the building's roof and points to the North Star. 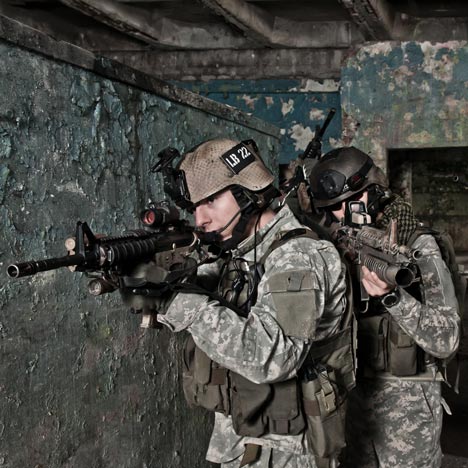 US military invests in 3D printing on the frontline

An indicator of true north, the star is aligned with the earth's rotational axis and is the only star in the northern hemisphere that appears not to move. It is often used in navigation.

"By aligning this new centre for community and collaboration under the North Star, SOM's design creates a meaningful architectural interpretation of the Academy's aspirations," the firm said.

The skylight is composed of structural steel plates arranged in a triangular grid and calibrated to resist lateral wind loads. Beyond bringing in natural light, the skylight acts as a solar chimney that expels hot air.

The protrusion calls to mind the glass pyramid outside of Paris' Musée du Louvre, added by Chinese-American architect IM Pei in 1989.

At the base of the skylight is an area called the Forum, where occupants congregate for social or academic purposes. Terraced levels accommodate both formal and casual gatherings at various scales.

Encircling the Forum are collaboration rooms whose glass walls "emphasise the quality of transparency that is central to the building's design".

At the centre of the building is the Honor Board Room, where enquiries related to the Cadet Honor Code are held. Natural light streams into the room via a glass oculus located directly above a conference table.

"The interior of the room is kept deliberately simple, with the walls, floor and ceiling clad in maple to emphasise the table illuminated at the centre of the room," the firm said.

The Air Force campus is a major Colorado tourist attraction, drawing nearly a million visitors each year. A key goal during the CCLD project was to create a distinct building that embodies the rigor of the original campus plan.

"We were honoured to have this opportunity to revisit one of our most important projects and to make a 21st-century contribution at the heart of the campus," said Roger Duffy, a design partner at SOM.

Other military-related projects in the US include combat shelters envisioned by design students at Iowa State University and a hospital in Texas by RTKL that features a terracotta screen.