The 50th anniversary of Pride in the UK is a "stark reminder" of how far there is to go to achieve LGBTQ+ equality in the design industry, especially when it comes to transgender rights, designers have told Dezeen.

Tens of thousands of people are expected to march the streets of London on 2 July to celebrate the city's lesbian, gay, bisexual and transgender (LGBT+) community.

Fifty years of Pride is both cause for celebration and reflection

"It's quite poignant because it feels on the one hand triumphant," said London-based queer designer Adam Nathaniel Furman of the 50th official UK Pride march. "But it's also deeply, deeply tenuous."

"Trans people are being vilified, othered, pathologised, politicised and spectacularised in all the ways and more that the gay community used to suffer through and if we allow this to stand, it is sophistic bigotry that will 100 per cent spread to the rest of the rainbow coalition," they added.

"The conversation has moved and right now our support needs to be with the trans community," said co-founder of queer design directory Queer Design Club Rebecca Brooker.

"Trans people have been under severe attack," Brooker argued. "We've now gotten people to wrap their heads around, 'we were all born this way'," she added, in reference to industry improvements in equality for non-heterosexual people.

"And now they're trying to wrap their heads around: 'Oh, so you're saying you were born this way ​​but you don't want to be this way'."

Research conducted by the Queer Design Club has highlighted the challenges facing trans people in the design industry.

In 2021, the organisation conducted what it calls the "design industry's first-ever field-wide survey on the LGBTQIA+ community" and found that trans respondents experienced a 41 per cent rate of job loss during the coronavirus pandemic compared to just 29 per cent of cisgender respondents.

Meanwhile, a 2018 report conducted by LGBTQ+ rights charity Stonewall found that 50 per cent of trans and non-binary people in the UK have hidden or disguised the fact that they are LGBTQ+ at work because they were afraid of discrimination.

The first UK Pride march took place 50 years ago on 1 July in London in 1972. It was a march of protest to show solidarity with those involved in the Stonewall Riots in New York – a series of uprisings that began in response to a police raid of the queer-friendly Stonewall Inn.

"Fifty years of Pride is a significant milestone – it's a stark reminder of both how long people have been fighting for equal rights, respect and change, but also just how recent our history is," said queer British artist Dominique Holmes, who recently designed a rainbow 50 pence coin to commemorate the event.

Design and architecture "spectacularly behind in its attitude"

"On the one hand 50 [years] could feel like a long time, but actually, if you think about the fact that that was almost the starting gun, then actually it's very recently that we've achieved so many of the milestones that we wanted," agreed Furman, who recently wrote the book Queer Spaces, an atlas of 90 LGBTQ+ spaces from around the world.

"This doesn't negate the fact that the design and architecture community is spectacularly behind in its attitude to all queer people, and needs to take the topic of LGBTQIA+ inclusivity much, much more seriously," they continued.

Designers in both Europe and the US told Dezeen that the industry and brands could support trans and queer people better by improving representation, closing the wage gap and creating space for queer individuals to connect and share experiences.

"The bare minimum is to close the wage gap between queer and non-queer workers immediately," said founder of pay-what-you-can online design school for people of colour Useful School Ritesh Gupta. 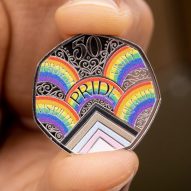 "Like many industries, the design world can be doing more to ensure greater representation and inclusivity," said Holmes.

"The issues that affect our community don't disappear the other 11 months of the year [outside of Pride month], but a lot of the support, empathy and interest does," they added.

"So many of my friends have just left because it's not a fair space and you can be gay or queer, but you can't embody your credit and your work," Furman recalled.

"You can't talk about it. I've only been able to start carefully speaking about it in the past few years."

Founder of For Them, a queer wellness company, Chloe Freeman argues that this year's Pride celebration coincides with a turning point in attitudes towards transgender and non-binary individuals within design.

"A lot of everyday design that we interact with is gendered, but we are evolving and challenging this binaried approach to identity and gender that has dominated to date," said Freeman.

"It will be interesting to see how design and architecture maps, responds and informs that," added the designer, who identifies as non-binary. Non-binary is an umbrella term used to describe people whose gender identity doesn't fall directly under man or woman.

Freeman believes that products such as For Them's The Binder, a chest binder designed specifically for trans and non-binary people, is an example of design centring around individuals who are usually marginalised or even excluded from the conversation.

"More designers and creators are solving queer-specific problems and desires than ever before, and it's been a privilege to be a part of that with The Binder," they explained.

"It feels like we are breaking binaries, dissolving labels and categories and evolving our language in a way that is making space for nuanced expressions of self," they continued.

Furman is far less optimistic, citing the US supreme court's recent decision to overturn the landmark court case that decriminalised abortion – Roe v Wade – as an example of the fragility of the rights of those who fall outside of the heterosexual patriarchy.

They believe that the Roe v Wade ruling could set a dangerous precedent for the removal of other basic human rights, particularly within the LGBTQ+ community. 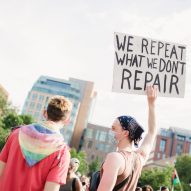 "We felt we were all moving in the right direction and that it was only blue skies ahead," they said. "But with the overturning of Roe vs. Wade, rights are being actively removed that had previously been granted."

"It's a reminder of how much we need to be profoundly aware of how easily all of the gains can be lost, and how recently we've achieved that solid solidarity, political awareness and a strengthened sense of community across the broad LGBTQ+," they continued. "The argument used could be very easily applied to gay marriage."

The right to same-sex marriage was only legally affirmed in the US in 2015, and in 2014 in Britain.

Brands and employers should adopt an intersectional approach to diversity

Brooker argued that to firm up LGBTQ+ rights, now is the time for employers and brands to adopt an "intersectional" approach to diversity, rather than focusing on siloed categories such as gender or race.

An intersectional approach is one that recognises that overlapping identities such as race and sexual orientation can create multiple experiences of discrimination.

"Something we found through our studies, and just through our experiences of our LGBTQ+ communities that black, queer and trans people are still the most left out," Brooker said. "And a lot of times companies approach diversity and inclusion from one angle," she continued.

"We need comprehensive or robust training that talks about the challenge of being at the intersection of multiple of those identities."

Similarly, Gupta emphasised the importance of equity in design in 2022. He echoed what designers told Dezeen during Pride 2020, following the Black Lives Matter protests.