Panellists discussed the history of the brand, and how to develop new designs and techniques without losing sight of older craft traditions. 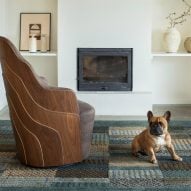 The panel took place in Kasthall's Milan showroom in front of a live audience.

During the talk, the speakers discussed the role that craftsmanship and heritage played in their design practices.

Eliasson, the designer of Quilt, described how she referenced traditional textile crafts when creating the rug.

"The inspiration comes from woven textiles where the warp and weft were mixed, but also Japanese Boro textiles, where patchwork fabrics are sewn together to create new patterns, to save the old clothes and textiles," she said.

"I've always been interested in working with a company that has its own production. I think that is something that is a very good strength, where you can be very creative within some limits" she added.

"I wanted to create a tufted rug that pushes what we do today at Kasthall."

Eliasson is a Swedish textile designer. She joined Kasthall's product and design department in 2015, creating works such as the Harvest and Feather rug for the brand.

Similarly inspired by Japanese crafts, Rune described a project for the K5 Hotel in Tokyo, where he collaborated with Kasthall to re-invent the traditional Japanese hand-crafted tatami mat.

"The Japanese were very surprised that we [took] their classic, and we made it into our classic," he said.

"Sometimes you have to play a little bit with what you have around you."

The panellists also discussed the enduring legacy of notable designers such as Gunilla Lagerhem Ullberg.

"In the '50s, we focused more on design, to contact those famous Swedish textile designers from the time, such as Astrid Sampe and Ingrid Dessau" Eriksson said.

"Those ladies were the first ones who really brought us out in the world seriously."

Eriksson, Kasthall's head of business and project development, first joined the company in 1995 as a hand tufter. He worked closely with the head of design Ullberg on notable projects such as the Moss and Fogg rugs.

"We got the yarn specification from Gunilla, and we placed them in the machine while she was still in Stockholm. We were tearing our hair out  because we didn't get it to work at all." Eriksson said.

"We just expected her to throw it away - and she said hallelujah! This is the best thing I've ever seen, exactly the way I want it."

"The linen threads were hanging out randomly, whereas our goal was always to have as even a surface as possible. So this became one of Kasthall's greatest successes."

"She [always] had an idea, something wild and crazy," added Jisenborn.

This article was written by Dezeen for Kasthall as part of a partnership. Find out more about Dezeen partnership content here.