The MS Kindergarten and Nursery is a facility for 40 children aged from one to two years old and was developed by Youji no Shiro, a branch of the Kanagawa-based firm Hibinosekkei that specialises in the design of spaces for children.

The building's architecture responds to the seasonal weather experienced in the city of Maebashi, which is located at the foot of Mount Akagi and is impacted by winter winds that blow down off the mountain.

The idea of responding to nature and weather conditions is central to many of the projects completed by Youji no Shiro, which feels that too many modern nurseries feature standardised designs.

"Recently monotonous nursery environments seem to be increasing," the architects claimed, adding that the project aims to create a space "where people spend a comfortable time in feeling nature."

The nursery includes several elements that reference traditional Japanese houses and the ways in which these structures typically respond to the climate.

The building's extended eaves prevent unwanted solar exposure during the summer months while allowing the sun's rays to reach deep into the interior during winter.

The roof also shelters a porch-like space between the interior and a landscaped garden. Glass doors lining the communal entrance area can be opened to connect the indoor and outdoor spaces.

A dining room, kitchen and other ancillary spaces are located on the opposite side of the lobby, with the two main nursery rooms situated in a perpendicular wing towards the rear of the building.

A hallway extending the full length of the building features a gabled shape that lends the building a domestic feel. A section of the corridor's ceiling was replaced with netting that the children can climb over.

Internal finishes, including a clay-like render and joinery featuring a pronounced grain, introduce natural tones and tactile surfaces throughout the spaces.

"In such a comfortable environment, children can feel the change of seasons and cultivate their sensitivity by themselves," the studio suggested. 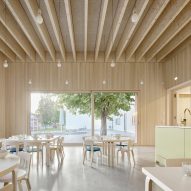 "At the same time they can have chances to touch local materials and learn its culture," it added.

The building's chunky timber frame has been left exposed and is complemented by the wood used for the ceilings, storage, cabinetry, and wooden tiles applied to the bathroom walls.

Hibinosekkei was founded in 1972 and launched the Youji no Shiro office in 1991. The practice focuses on creating characterful spaces for children and has designed over 500 facilities throughout Japan.

The firm's previous projects include a nursery in Yokohama featuring a metal facade punctured by house-shaped windows and a child-care centre in Tokyo where children with developmental difficulties can play on a climbing wall and swing.

The photography is by Ryuji Inoue.