State-owned Chinese firm The Architectural Design and Research Institute of HIT has completed a theatre in Henan Province with a metal-clad exterior informed by the sails and hulls of ships.

The Zhengzhou Grand Theatre contains a 1,687-seat theatre, 884-seat concert hall and an opera rehearsal hall, alongside a multifunctional hall and rehearsal spaces.

Treated as distinct forms within the building, these venues are all united by foyer and circulation spaces designed with flowing forms that reference the nearby Yellow River.

"Zhengzhou Grand Theatre, as the highest-level performing arts landmark in the Central Plain Region of China, takes a 'boat of art sailing on the Yellow River' as the design concept," said The Architectural Design and Research Institute of HIT (ADRI of HIT.)

"Through contemporary architectural languages, the project creates the image of a majestic 'ship', which conveys the significant culture and civilisation of the Central Plain," it continued.

Externally, these ship-like forms intersect with one another, with the points where they meet becoming large, sheltered entrances into the foyers accessed by concrete steps.

Clad in aluminium panels, the facades are cut by large, full-height areas of glazing providing views back out to the city, with diagonal strips of lighting illuminating the form at night.

"Simplification is at the core of the design. By combining 'sails' of different curvatures, the facade units were optimised into irregular hyperbolic surfaces," said the firm.

"The modular panels create a curvy form that emulates the irregular flow of the Yellow River; meanwhile, those components could be manufactured in a standardised way," it continued.

Inside, the foyers occupy a large, high space between the external envelope and the venues, lit by the large areas of glazing in the facade as well as lozenge-shaped skylights that have been used to create a pattern across the ceiling.

The steel columns and trusses of the facades structures have been left exposed internally, contrasted by the bronze-coloured metal cladding of the venues and glossy stone flooring.

"The exterior structure adopts steel trusses, and the roof is formed by grid structures, supported by three tower-like, concrete-bottom structures," said the firm. 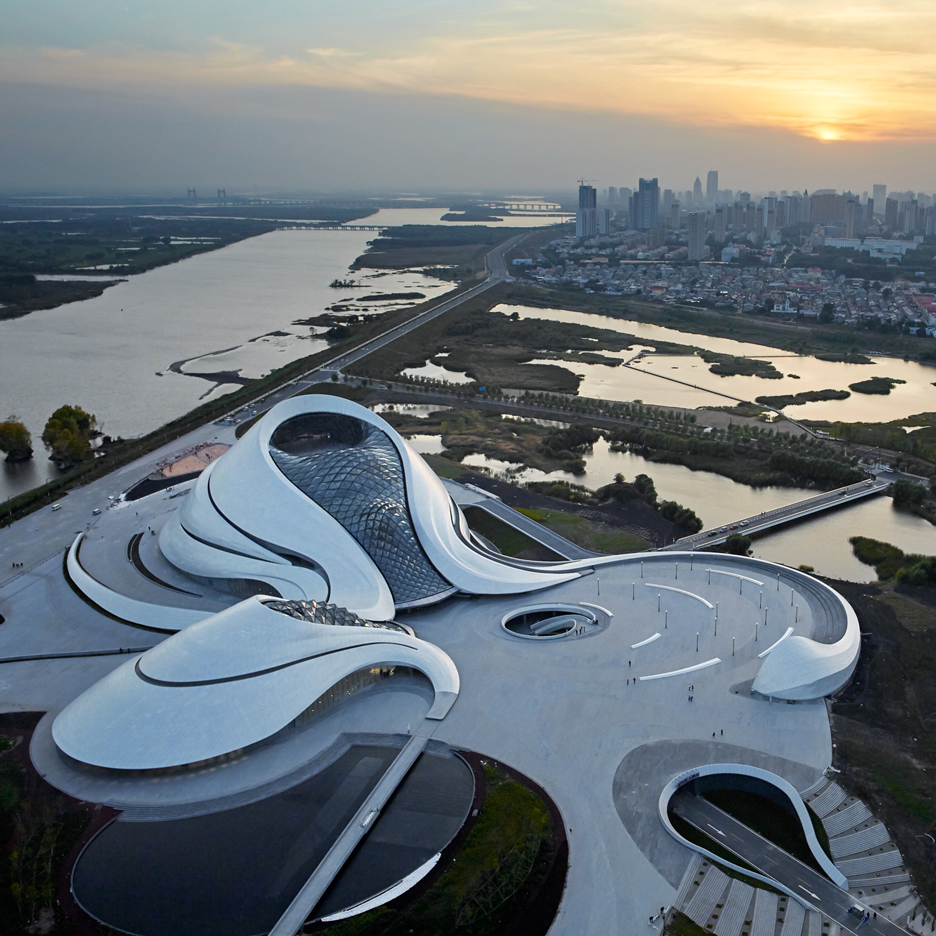 Each of the venues has been given a distinct material treatment but is given a sense of continuity through the use of flowing, dynamic forms.

In the concert hall, pale wood and an undulating ceiling create a light, open space, while the theatre has been given a darker wooden finish with concealed lighting to create a sense of intimacy despite its large height.

A ribbed wall of deep red and gold surrounds the opera rehearsal hall, and wooden panelling and mirrors line the walls of a dance studio.

As well as giving each venue a distinctive feel, the large foyer spaces between them are a means of dealing with acoustic interference as well as evacuation routes.

Other upcoming theatre projects China include a volcano-like performing arts centre in Hainan by London practice Heatherwick Studio, and a theatre in Guangzhou by Steven Chilton Architects with a facade informed by flowing silk.

The photography is by TimeRaw studio unless stated otherwise.