Simple forms inspired by nearby Canadian agricultural buildings meet a contemporary, monochrome palette in this remote home by Everyday Studio.

The low-slung house is located in a clearing surrounded by thick forests in Manotick, a small community outside of Ottawa. The project is called T-House, based on the shape of its layout.

"The design is organized into two single-storey volumes whose layout, form and materials are conceived as a modern interpretation of simple, linear farmhouses in the region," explained Mateusz Nowacki, the founder of Everyday Studio.

"The reference to tradition and time-tested building methods is paired with contemporary architectural detailing," Nowacki added.

One of the two volumes contains a three-car garage and is set perpendicular to the other, creating a sheltered courtyard. A glass-walled walkway connects to the rest of the home, and also marks the main entrance into the 3,400-square-foot residence (315 square metres).

"A small courtyard and glazed threshold are formed, which provide an intimate scale to the home as well as a subdued entry point that visually connects the front and rear of the site," Nowacki explained.

The primary volume of the home is a black-and-white gabled structure clad in metal panels, slender bricks and blackened wooden siding.

Throughout the building, indentations in the facade are used for planting beds, insuring that greenery can be seen through every window while protecting the resident's privacy from the street.

Everyday Studio placed the open kitchen, living and dining room in the centre of the space, which helps separate two pairs of bedrooms from one another. In total, the home has four bedrooms, five bathrooms and a study. 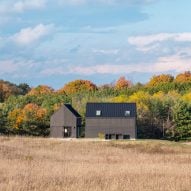 "Carefully positioned glazed openings provide privacy from the street at the front and direct views to the landscape at the rear," said Nowacki.

According to the architecture studio, the width of this space allows it to be naturally ventilated. The generous living area is anchored by a concrete fireplace and feels light and airy from the pitched ceilings that follow the roof's gabled profile.

At the back of the home, part of the volume containing the garage is carved out to create a sheltered exterior space, which the architecture studio described as a "tertiary interior space."

In the living room, a wall made of wooden slats echoes the exterior cladding, while providing a focal point to the space.

Other homes found in Canada's most populous province include a compound by MacKay-Lyons Sweetapple Architects topped with oversized roofs and an all-white house by Saunders Architecture.