Brazilian architecture firm Studio MK27 has completed Caza Azul, a concrete home in the state of São Paulo that was elevated from the ground to better integrate with the surrounding landscape.

Located in the environmental preservation area of Serra do Guararu in the Atlantic Forest, Casa Azul comprises two stacked concrete shells. The two rectangular volumes are slightly offset from one another.

The 400-square-metre Brazilian home is raised above the tropical forest floor on concrete pilotis, which creates a covered space below that the architecture firm finished with wooden decking.

"We designed a wooden deck platform elevated from the ground to protect the pavement from moisture and, at the same time, integrate with the existing vegetation," said Studio MK27.

In addition to helping the house merge into the wild landscape, the raised structure creates views of the rainforest treetops and the nearby Atlantic Ocean.

In the rectangular volume closest to the ground, large sliding glass doors span both lengths of an open-plan living space, providing a panorama framed by the concrete walls, floor and ceiling.

"On one side, you can contemplate the view of the sea and the preserved Atlantic Forest, and on the other, you receive the sunlight that comes from the north while appreciating the trees in the garden of the house." 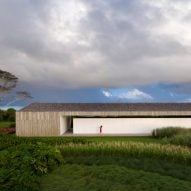 The top volume, which holds the bedrooms, features a wooden lattice screen that spans both sides of the top floor to diffuse the sunlight.

"The wooden muxarabi closures work as a light filter and sun protection for these rooms, without spoiling the view," Studio MK27 explained.

The elevated concrete volumes form the ceiling of a 15-metre-long and eight-metres wide covered area on the ground floor deck, which holds the house's swimming pool.

A rustic stone wall separates service spaces – including a bathroom, sauna, and laundry space – from the deck. The concrete slab above spans 12 metres from the wall to the supporting pilotis and then cantilevers a further three metres.

"The project can be understood as a great game of full and empty spaces, which sometimes configure free spaces, sometimes impose the presence of massive blocks, but always maintaining a lightness," said Studio MK27.

Casa Azul was completed to the highest credential certification of Brazil's Green Building Council, according to the studio.

The Brazilian practice aimed to create the house as an exemple of "how to build in the midst of exuberant and protected nature, without damaging it".

Other projects from Studio MK27 include an off-grid residence in the rural region of Catuçaba that was prefabricated in wood and a seaside villa located in Brazil's Bahia province.

The photography is by André Scarpa.