A bee explores the interior of Micasa Vol C, a multi-use pavilion for a furniture retailer in São Paulo, in this unconventional architecture film by Studio MK27.

The short movie offers a unique perspective on one of the architect's recent projects.

It shows a bee embarking on a fateful journey that starts with it flying through the skies of São Paulo, before descending and entering the building. Inside, it briefly explores the space, before encountering disaster.

The video is the latest in a series that Kogan has produced about his architecture projects. Previous films include one that shows his Toblerone House through the eyes of a cat and another that suggests his Redux House was the cause of a marriage breakup.

"I like this relationship with architecture over different points of view," Kogan told Dezeen.

"Once, when researching to teach a class on Jacques Tati's Playtime, I found a story in the news about a critic who said that he watched the film several times in different seats in the cinema, and because of that he always had a new perception of the film. I thought that was great."

"I have always wanted to make an observation from the point of view of a flying insect," he added. "MiCasa Vol C has an adequate space: lots of free room and high ceilings."

The 225-square-metre structure is designed to be used as a retail space, an exhibition gallery or a studio workspace for artists in residence.

Square in plan, with a ceiling height of 7.5 metres, it features a lightweight timber frame, a facade of both translucent polycarbonate panels and opaque sheets of white metal, and large entrances. At its centre is a globe-shaped pendant designed by artist Isamu Noguchi.

A drone was used to shoot all the parts of the film showing the bee's point of view.

"We worked with one of the best drone controllers in São Paulo," explained Kogan.

"It was extremely difficult and tense, since the drone had to make delicate internal manoeuvres. I was just waiting for the destruction of the Noguchi!"

This footage was combined with video snippets that the team found on the internet, showing a bee against a chroma key background – commonly known as green screen.

"Our first idea was to film from the point of view of a fly, but the special effects would have cost a lot," said Kogan. 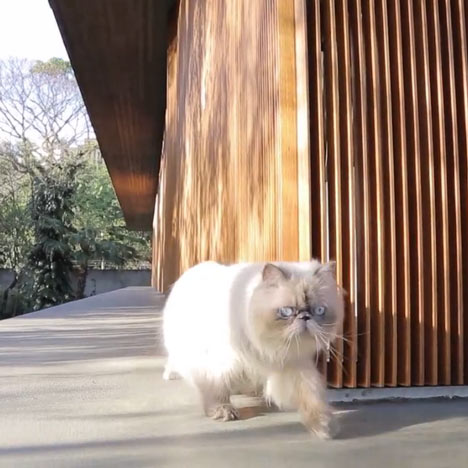 Movie: Toblerone House by Studio MK27 through the eyes of a cat

"In the end we found small snippets of already made movies on the internet, the bee against a chroma key background. We ended up using this material for practical and economic reasons."

"No animals were harmed in the making of this film" he added. "Thank God, we love bees!"

The film was shot in black and white, as colour would not accurately reflect the natural vision range of an insect.

"Bees have a completely different colour detection system from humans and can see colours within the ultraviolet spectrum that we can't," said Kogan.

It is accompanied by a soundtrack that combines a string-heavy score with the buzzing sounds of a bee.

Other recent projects by Studio MK27 include a gated community of houses on the outskirts of Madrid, which was also shortlisted for a Dezeen Award, and a house in São Paulo with a monumental green roof.