UK practice Invisible Studio has collaborated with local community groups to design and build a shelter from timber sourced within the Westonbirt arboretum in Gloucestershire, England.

Designed to be used by Westonbirt's outreach programme, the shelter was made entirely from oak felled from the arboretum as part of its routine woodland management.

"Westonbirt has an outreach programme where they work with local community groups and adults with learning differences in a woodland context – coppicing, charcoal making and numerous other woodland activities," said Invisible Studio founder Piers Taylor.

"The shelter replaces a temporary canopy and is a permanent home for their outreach programme," he told Dezeen.

Taylor collaborated with timber experts Xylotek and members of local community groups to determine the form of the shelter.

Its distinctive hyperbolic-paraboloid shape evolved through a series of workshops where models made from cardboard, cable ties and timber strips were developed.

"We went along to a making session with the groups with a couple of free-form models that I'd made in the studio from cable ties and cardboard – we wanted a free-form structure to encourage everyone to dive in and take part – precious, exacting structures tend to exclude people and prioritise 'expert' knowledge," Taylor said.

"We then made a bigger version on site with the groups, with timber laths, which evolved the form through making, and we then 3D scanned that larger model, which we'd made with many hands, and optimised it structurally and technically via an iterative process where we'd go back to the groups to make further models that we'd then scan again."

The structure, which was built by Forestry England volunteers and staff, was constructed largely from steam-bent timber.

The joints were made from recycled aluminum signage from across the site. 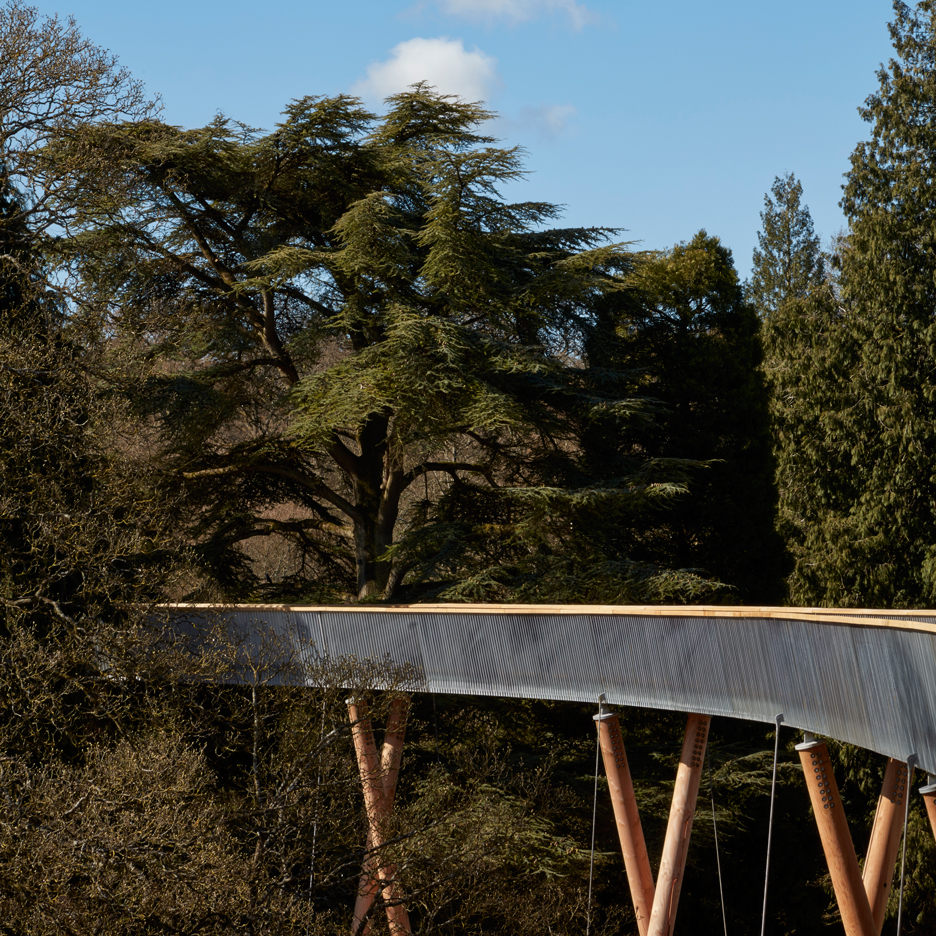 It aims to provide shelter for the group activities, while allowing extensive views out to the surrounding woodland.

The shelter has no permanent internal fixtures for flexibility and so the space can be utilised for numerous purposes.

Taylor hopes that the project will demonstrate the potential of using locally sourced materials in inventive ways.

"The community were brilliant and loved being able to join in and the design allowed a looseness that came from the group working," he said.

"I think the users have been deeply affected by the process, and I hope visitors realise the potential in using materials to hand in innovative ways!"

Westonbirt, which is the UK's National arboretum, is a forest estate in Gloucestershire established in the Victorian era by Robert Holford that contains over 2,500 different species of tree from all across the world.

Invisible Studio previously designed a pair of woodland maintenance buildings on the estate, which were also built entirely from trees felled as part of its routine maintenance. The arboretum also contains a 300-metre-long elevated walkway designed by Glenn Howells Architects.

The photography is by Jim Stephenson, unless stated.