Sportswear brand Adidas has collaborated with British designer Stella McCartney on a collection of maternity sports clothes designed to adapt to women's bodies "through each stage of motherhood".

"The collection has been inspired by and created for women on their motherhood journey, whether just at the start or having recently given birth," Adidas told Dezeen.

"The capsule fuses signature Adidas by Stella McCartney animal print with soft and stretchy performance fabrics designed to adapt with the body through each stage of the motherhood journey," the brand said.

The performance nursing bra, which comes in purple and black, has adjustable cross-back straps and removable pads in the cups. A clip embedded in the bra's strap has been strategically placed to allow wearers to breastfeed or pump easily and discreetly.

Available in sizes 34B to 40E, it is made from a lightweight, stretchy and soft fabric composed of a 79 per cent recycled polyester and elastane blend. The material allows the bra to fit snugly around the wearer's body.

"Performance" is a sportswear clothing category within the brand that includes products suitable for low to medium impact workouts and sports, such as running or yoga.

To develop the bra, Adidas conducted research and tests with pregnant women to find out how they could best be supported during exercise.

"Before starting, we interviewed pregnant women about what they expect from a nursing bra. After this, we created more than three proto samples and tested them with several pregnant women," the brand explained.

"We also reviewed the bra with two external bra experts that gave some more input on the construction and placement of special fabrics."

The rest of the Adidas capsule collection is made up of a jacket, a tank top, a pair of trousers and a pair of leggings, which have been engineered to provide mothers with maximum comfort and adjustability.

For example, the training top has a racer-back style that Adidas said provides added support for low-impact movement in comparison to single strap tops.

Made in part with recycled materials, the oversized maternity 3-in-1 jacket has a fully removable insert that allows mothers to carry their babies close to their bodies. 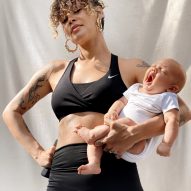 Meanwhile, the maternity tight leggings have a special stretchy lining over the stomach area which adapts and expands as the baby grows.

They have been made in part with Parley Ocean Plastic, which has been collected from shorelines by environmental organisation Parley for the Oceans.

The final garment in the collection is the maternity pant, a pair of loose-fitting trousers with a bungee cord adjustable waist, zipped pockets and ribbed cuffs.

All of the garments feature an animal print design – a signature McCartney pattern.

McCartney, who also recently worked with Adidas on a leopard-print football kit for English club Arsenal's women's team, believes that the collection will enable mothers to express themselves better through clothing, especially when compared with other sportswear on the maternity clothing market.

"Too often, maternity performance wear is muted and pared back and we're so proud to be introducing our first ever collection that reimagines pregnancy workout style," McCartney explained.

"Each piece is designed for comfort first, but with technical details and bold colours that allow new and expectant mothers to express themselves."

Since 2021, the number of sports bras sold in Britain has increased by a third to 7.1 million, resulting in what retailers are calling a "bra revolution".

Many brands have attempted to improve or even reinvent the traditional sports bra, often relying on advances in technology to do so.

Examples include sportswear startup OMsignal's smart bra, which gives women fitness metrics and workout tips via an integrated platform called OMrun. The platform measures and reports back on fitness metrics such as distance, heart rate and calories.

Sportswear brand Reebok applied a texture-changing gel found in NASA's spacesuits to make a bra that adapts to support different levels of movement.

Photos are courtesy of Adidas.