Australian studio Kennon is designing a commercial office tower in Melbourne called 550 Spencer that will feature more than 1,000 glass-like solar panels across its facade.

According to Kennon, this is estimated to prevent the emission of 70 tonnes of carbon dioxide every year.

Kennon's design of 550 Spencer's facade comprises 1,180 solar cells, which will have a similar appearance and thickness to a traditional glass facade, unlike commonplace solar panels.

The panels set to be used will be from German company Avancis' "solar facade system" called Skala, which has never been used in Australia before.

"To our knowledge, there isn't a functioning solar facade system in Australia," the studio's founder Pete Kennon said.

"The national construction codes and standards of construction have not yet made provision for solar facade products," Kennon told Dezeen.

Though Skala has been used in Europe, the studio had to conduct a number of tests with local expert Red Fire Engineers to ensure its fire safety and approval from the state of Victoria's building appeals board.

"We did not invent the product but we've invented the way it can come to our country, and our country is such an enormous market because of the access to sunlight," explained the studio's founder.

"We are the only project group that has completed this due diligence and testing and therefore made the breakthrough as the first in the country."

The 550 Spencer tower was commissioned by a private developer for a corner plot on the edge of the city's central business district.

It will form part of a high street that is in the process of being renewed and it is hoped to set a precedent for construction in the area. 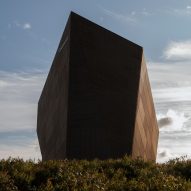 The majority of panels will be placed on the building's north facade.

According to Kennon, the system will produce more energy than the building uses, meaning that it is expected to have almost no ongoing power costs.

By creating a solar skin for the facade in place of a traditional rooftop array, Kennon has freed up space for a roof garden for office users.

The studio hopes that taking the steps to bring the solar facade system to Australia, it encourages further use of it in the country and in turn more sustainable construction.

"We see the major success of the project as that it opens the opportunity of a solar facade product to the Australian industry," concluded its founder.

"We hope this project will set a benchmark for the future of on-site power generation in dense urban environments."

International studio Snøhetta is another firm making use of solar power in its office designs, such as in its Powerhouse Telemark and Powerhouse Brattorkaia offices.

Elsewhere, Dutch studio MVRDV is currently designing an office that will be covered in photovoltaic panels. Named Sun Rock, the building will have a curved form to maximise the amount of sunlight its facade can harness to create energy.

The visuals are courtesy of Kennon.