Ukrainian designer Victoria Yakusha has created her first collection of furniture following Russia's invasion of Ukraine, which explores her connection to her homeland through a tapestry and animal-like seating.

Called Stepping on Ukrainian Soil, Yakusha's collection includes a woven wool tapestry spanning a height of two metres, as well as a series of benches and stools.

Together, the pieces intend to highlight every Ukrainian citizen's individual connection to "Ukrainian earth – its spirit, its history and its power," the designer said.

As the first collection she has created since the Russian invasion began in February, Yakusha designed the pieces in direct response to the ongoing conflict.

Zemlia is a shaggy black tapestry featuring a dramatic circular body from which umbilical-like strands trail to the floor in reference to a "vital" link to the earth below.

The name of the piece translates to "earth" in Ukrainian, which nods to the black soil common to the country also known as chernozem.

Yakusha used an ancient but increasingly rare artisanal technique known as lizhnykarstvo to create the tapestry, which is thought to have originated in the Carpathian Mountains.

"At the core of the tapestry is an ancient Ukrainian wool-weaving technique, but I've added layers to it to get a live rich texture, like soil," the designer told Dezeen. 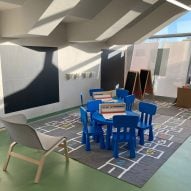 Volyky – a derivative of the Ukrainian word for freedom – is a series of textured black and white benches sculpted in abstract shapes suggestive of small animals.

The benches are crafted from Faina's signature material, called ztista ("made of dough" in Ukrainian), which is a mixture of clay, hay, recycled paper and other natural materials.

"Volyky benches are a series of imaginary creatures – symbols of a pure, free nature," explained the designer.

The collection's black and white stools are named Duzhyi, which means sturdy. Characterised by striking curved forms also made from ztista, the stools were designed to embody firm ground.

"When I made my first sketches, I was drawn to massive grounded forms. It was a moment of instability when you didn’t know what tomorrow would bring," reflected Yakusha.

The benches and stools were constructed using a traditional technique known as valkyvannya, which has typically been used to finish the walls of houses. The ztista material was applied to the wooden base of the furniture to form a textured outer layer.

"The purpose of the collection is to convey the feelings and the spirit of our earth," Yakusha concluded.

Stepping on Ukrainian Soil is presented by Faina Gallery, which is part of Yakusha's furniture brand Faina.

The designer founded her eponymous studio Yakusha Design in 2006 before launching Faina in 2014. Other projects by Faina include a cloud-like armchair and an Antwerp showroom for the brand.

The photography is by Tijs Vervecken.