Architect Victoria Yakusha has revealed plans for a cultural complex in the village of Bolotnya, Ukraine, to house artworks by folk painter Maria Prymachenko that were recently saved from a building destroyed in the Ukraine war.

The museum called Maria's Way would be formed from a row of 15 conical domes clad in textured, white clay in a nod to the country's vernacular mazanka houses.

Connected by narrow corridors, this undulating structure was designed to resemble an animal's mane – a common motif in Prymachenko's work, which often depicts mythical beasts from Ukrainian folklore.

The site would also house a cafe, a reed-covered orangery and an artist's residence for those who "want to linger in Maria's world a little longer", Yakusha said.

Plans for the cultural complex were announced at an exhibition in Kyiv last month. This presented paintings by the artist that were saved from the ruins of the Ivankiv Historical and Local History Museum near Kyiv, which was burned down by Russian soldiers in February as they advanced on the Ukrainian capital.

According to Yakusha, 14 artworks by Prymachenko could be saved from the burning building by a group of local men. But a number of paintings but other Ukrainian artists were lost.

"They did not have time to save everything," she told Dezeen. "A strong fire broke out and the ceiling began to sag so they had to leave the building."

"Destruction not only of military infrastructure but also of historical and cultural monuments, museums and libraries can be traced in all the places the Russians reached," she continued. "They are trying to destroy Ukrainian identity, our memory and heritage."

Alongside the saved paintings, the new museum commissioned by the Maria Prymachenko Family Foundation will house embroidery works by the artist, as well as photographs and household items from the foundation's private collection, which have never been exhibited before.

These will be displayed in the museum's 15 oculus-topped rotunda halls, each exploring a different period of Prymachenko's life from her childhood to her last moments.

Born in 1909 to a peasant family in Bolotnya – around 60 kilometres from Chornobyl – Prymachenko taught herself how to paint and went on to become one of Ukraine's most celebrated artists, appearing on everything from stamps to commemorative coins.

"In her life, there were many challenges and many sufferings," Yakusha said. "In addition to illness, she lost her husband, raised her son alone and survived world war two."

"However, in Maria's paintings, good always wins over evil. There is a love for life and conviviality," she added. "Maria Prymachenko is a pure symbol of Ukraine."

The museum's row of rotunda halls would culminate in a glass-domed orangery holding exotic plants that resemble those imagined in Prymachenko's technicoloured artworks. 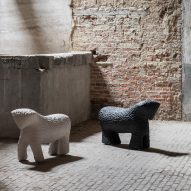 Yakusha envisions the base of this greenhouse to be fringed in reed thatching, which is traditionally used to form roofing in Ukrainian vernacular homes.

"We're hoping to use ecological materials local to Ukraine like clay, reeds, wood and others," the architect said. "We have to be responsible for our planet and respect our land."

Nearby, a cafe will serve food based on Prymachenko's own recipes while the artist's residence will offer a place for sculptors, potters and embroiderers to immerse themselves in her work.

The Maria Prymachenko Family Foundation has launched a public fundraising campaign to finance the cultural complex, with the aim of preserving the artist's legacy and her contribution to Ukraine's cultural heritage.

"Thanks to the Ukrainian armed forces, we have shown how brave we are," Yakusha said. "But for me, it is very important that Ukraine is not only mentioned in the context of war. We are a country with a rich ancient culture and a talented people."

"The more we understand who we are and feel our roots, the more difficult it will be to destroy us," she added. "Culture is one of our shields, the soil of the nation."

Since Russia invaded Ukraine in February, more than 140 significant cultural sites across the country have been damaged, including 12 museums, 65 religious sites, 15 monuments and the constructivist Railway Workers Palace of Culture in Kharkiv.

In response, Ukrainian president Volodymyr Zelensky has called for Russia to be expelled from global heritage body UNESCO.

"Russia is deliberately and systematically destroying Ukraine's cultural and historical heritage, as well as social infrastructure, housing, and everything necessary for normal life," he said in a video address in June.

"A state that does this cannot be a member of UNESCO and cannot remain at the UN as if nothing had happened."