To.org started out in investment but has moved into radical design with projects including a 3D-printed toilet. In this interview, co-founder Nachson Mimran tells Dezeen how "creative activism" can unlock social and economic growth.

To.org has an unusual business model that combines venture capitalism with a charitable foundation.

However, the company recently launched a design consultancy, producing experimental prototypes as a way of tackling global issues like climate change, gender equality and the refugee crisis.

The aim, according to Mimran, is to move beyond the traditional philanthropy model. At a time when social media has huge power over public opinion, he believes design can be a tool to accelerate change.

Using design as "a meme"

"Design can be used as a Trojan horse," explained Mimran. "We can use design as a conversation starter – as a meme – and we can embed really important messages inside."

Mimran and his younger brother Arieh founded To.org in 2015. The for-profit arm of the business invests in ethically minded companies like vegan burger brand Beyond Meat and climate-conscious fashion label Pangaia.

The non-profit arm supports grassroots organisations such as The Great Green Wall, with which it has partnered on a drive to plant an 8,000-kilometre wall of trees across the southern border of the Sahara desert.

"Activism needs to be creative"

The new third arm of the company – called To: Create – is described by Mimran as a collective of creative activists.

Set up like a design consultancy, it brings together architects, designers and scientists to work on "design provocations" that test ideas and attract attention.

Its list of consultants includes supermodel Naomi Campbell and athlete Sierra Quitiquit, alongside creative talents from disenfranchised communities around the world.

"We found that there was a lack of interdisciplinary connection between the for-profit world and the non-profit world, between governmental agencies and the arts," Mimran said.

"That has created an opportunity to look at activism in a creative way," he continued.

"We live in a world of such polarised opinions and emotions that, ultimately, creativity is the one thing that can allow us to find common ground."

"A reframing of possibility"

To.org projects so far include the Shadowman Van, which saw a Richard Hambleton artwork – a 1970s ice cream van – become a portal for communication with various refugee communities.

The project involved creating replicas of the van in various refugee settlements. These replicas have since been used for other creative purposes; Mimran recalls how one has served as both a pirate radio station and as an incubator for a reusable-sanitary-pad enterprise.

Other examples include The Throne, a collaboration with Spanish studio Nagami, which used discarded medical equipment to create a 3D-printed toilet intended for communities lacking sanitation.

"These art pieces unlock a reframing of possibility, which unlocks a lot of really cool opportunities," Mimran told Dezeen.

Doing business in a different way

Mimran didn't always have this activist mindset. As the son of agro-industry tycoon Jean Claude Mimran, who made a fortune from sugar and wheat farms in West Africa, his early ambitions were centred purely around for-profit business.

But after the untimely death of his mother in 2013, the entrepreneur embarked on a period of soul-searching. He and Arieh initially took a trip to Bhutan, then started attending humanitarian conferences like the UN General Assembly and connecting with architects like Bjarke Ingels and Mariam Kamara.

"We realised we were in a unique position to start challenging whether business could be done in a different way," he said.

Mimran has used his position of privilege to drive To.org's growth.

As chairman and creative director of The Alpina Gstaad, a five-star hotel that opened in 2012 and is part-owned by his father, he exploits opportunities to connect the wealthy clientele with his ambitions for change. 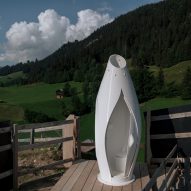 "In 2015, I was looking at our guest list over the past three years," he said. "I thought, these are world leaders. And they're in a space that I have curatorial control over."

One way Mimran has done this is by installing a Jean Prouvé demountable house in the hotel's grounds, to serve as an artists' residency.

"When people were maybe expecting an artist to be there to paint their portrait, it has instead allowed us to have a conversation around important topics," Mimran said.

Many of To.org's charitable initiatives are focused on refugee communities, including Nakivale and Bidi Bidi in Uganda, and Kutupalong in Bangladesh.

These settlements are often presented as places of deprivation, yet Mimran sees them as hubs of opportunity, filled with untapped talent in need of a platform.

"When we first went to Nakivale, in 2017, what we saw blew our minds," he said. "The talent there was so mesmerising that we knew we had to start building relationships with these communities."

It was this that led him to develop plans for the Bidi Bidi Music & Arts Centre, which will serve as a talent incubator for a settlement of over 270,000 South Sudanese refugees.

Mimran believes his attitude towards these communities stems from his upbringing, which was divided between Switzerland and Senegal and also saw him spend time in Ivory Coast and Morocco.

He recalls telling childhood friends that Africa was "amazing" and not the place of poverty they imagined.

"Sometimes I think that the biggest privilege that was afforded to us was the ability to grow up in such different places," Mimran said.

"Sometimes I saw more energy and positivity in the streets of Dakar than I would in Geneva."

Going forward, he hopes the ideas he's championing with To.org can lay the foundations for a radical shift, acknowledging the value that refugees can bring to communities.

"What's going to happen when we have hundreds of millions of displaced people, accelerated through climate change?" he asked.

"Our current solutions don't work," he added. "We need to question how we create future autonomous cities that can be springboards for the displaced."

"I don't even think it's just for refugees; I would and go live in a place like that."

The photography is courtesy of To.org.