Bathroom company Duravit has designed a toilet that could be used in future homes on Mars and installed it at the prototype Martian House in Bristol, UK.

Duravit aimed to create a toilet that would be comfortable for people who are living on Mars for long periods of time.

"Overall, everyday life on Mars will be challenging and fairly arduous," said Duravit head of research and development Franziska Wülker.

"It's so important that everyday items in the home are designed to be as simple and comfortable as possible," she continued. "That applies especially to the things we don’t like talking about, such as using the toilet."

The shower toilet, which would make use of the ice found on Mars, looks similar to current versions used on Earth.

According to Duravit, this was a deliberate choice for user comfort and due to the fact that, unlike in space, Mars has gravity.

"It looks very much like a regular toilet because it basically is a regular toilet – at least the parts we can see," Wülker told Dezeen. "Why did we not create a toilet that looks more fit for outer space? One reason is comfort." 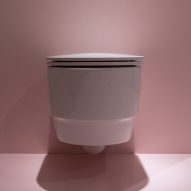 "When you have to put on a space suit to go for a walk outside we want to make the everyday life things inside the house as comfortable as possible," she continued.

"The other reason is that a regular toilet simply is quite a good solution. Mars does have gravity so in contrast to toilets that have to work in weightlessness, the excrements fall into the bowl by themselves and a suction system is not required."

The latrine integrates a rear wash and lady wash shower for cleaning as water is expected to be available on Mars, but toilet paper would require transporting from Earth.

It is designed to use small amounts of water and treat wastewater for reuse, while urine would be used as fertilizer.

"A Martian toilet should be easy to use, require a small amount of energy, water and other resources," explained Wülker. 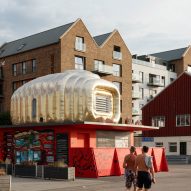 The toilet also has an odour extract as it will be impossible to open windows, as well as a heated seat, a hygienic glaze to reduce the growth of bacteria and an illuminated bowl for use at night.

"What I did not know before starting the project: there is quite a bit of water on Mars, just in the form of ice so that is a smaller problem than I first thought," added Wülker.

"We can use solar power as an energy source to some extent but this is limited due to sandstorms which can last for weeks. So energy extensive toilet solutions – like an incineration toilet that burns feces – were not a suitable option."

The Martian toilet forms part of the prototype Martian House, which was designed by UK studios Hugh Broughton Architects and Pearce+ in collaboration with artists Ella Good and Nicki Kent to investigate what people's everyday life on Mars would be like.

"Going to Mars gives us a chance to find out what we really need and cherish in our lives," said Wülker.

"We have to consider both functionality, minimal use of resources and design. In the end, the Martian house would not only have to function but should also be a place where you feel at home and comfortable."

The photography is courtesy of Duravit.