Architecture studio KKAA YTAA has completed a home with a central courtyard named House in Front of a School in Nara, Japan.

Located in the densely populated capital of Japan's Nara Prefecture, the house was split into two parts that are connected by a bridge across a central courtyard.

The unusual arrangement was created as the client wanted a space that supported their work-from-home lifestyle and gave them access to the outdoors.

"The owners are a young couple who both work," KKAA YTAA told Dezeen. "They wanted a compact life and a lifestyle where they could feel close to nature even on busy days."

Set on a "lifeless" site surrounded by rental apartments and more traditional homes, the studio wanted the home to stand out from its surroundings.

KKAA YTAA divided the house in two so that the majority of rooms look out onto the internal courtyard, while the street-side facade is completely blank.

"It is a quiet place with few pedestrians and cars, but it is an environment that feels a little lacking in a sense of life," said the studio.

"We decided to divide the building into two to create a blank space," the studio continued. "No matter where you are in the house, you can feel the light, wind, and greenery close to you by opening up to this margin."

The studio chose to raise one half of the house, which contains an open-plan living space and kitchen, on timber supports to reduce the risk of flood damage. The area beneath this structure is also used as a car park.

A timber bridge across the central courtyard connects this raised building to the other half of the home, which contains two bedrooms and a bathroom. 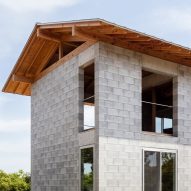 With adjustable walls, the bridge can be adapted to act as either an enclosed walkway or a deck that is open to the outside.

"We aimed for a presence that can be said to be both the outside and the inside," said the studio. "By opening and closing the walls, the bridge can adopt different forms, such as an external space where the sky and wind can escape, an internal space as a connecting corridor, and a semi-outdoor space like a porch that is connected to nature."

The home's timber structure was left largely exposed in the interiors and was complemented with minimal timber furniture.

Overall KKAA YTAA hopes that the home will encourage others in the area to incorporate outdoor spaces in their homes.

"By inserting a blank space between these two buildings, we hope that nature and the city will be indirectly connected, and that it will lead to an increase in the open scenery in this quiet residential area," said the studio.

Other Japanese homes recently featured on Dezeen include a minimalist house designed by Nori to reduce construction waste and a fish tank-informed home by Nao Iwanari.