Swiss architecture studio Herzog & de Meuron has unveiled designs for the Sixth and Blanco restaurant, shop and hotel development in Austin, which will incorporate existing stores and houses.

Located at the intersection of West Sixth Street and Blanco Street in Austin, the structure will be Herzog & de Meuron's first project in the state of Texas.

Built from mass-timber, the development will occupy an entire city block and will be built around existing shops and homes on the site that date back to 1920.

Designs show a structure that emerges above and through the existing storefronts. On the street, new stores will be characterized by steeply sloped wooden overhangs that shade a series of colonnades along the sidewalk.

The whole structure will be clad in wood of different patterns with a screen above the street front and more tightly knit facades behind as the structure rises.

Beyond the street front, the development's entire ground floor will be dedicated to shops and restaurants. Offices will be located on the floor above with a 60-room hotel on the second floor and two storeys of private residences at the top of the building. 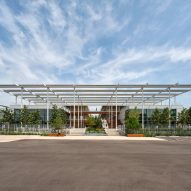 According to the architecture studio, the materials chosen, which have not yet been disclosed, will use a "materials palette aligned with the historic fabric".

This whole building will be characterized by a series of setbacks from the street front. It will decrease in density as it rises so that the surface areas of the stepped form can be utilised for rooftop areas as well as breezeways to complement the "passive cooling" the studio has planned.

Pedestrians will enter through the street, under a series of elevated walkways, into a void within the structure that will serve as a thoroughfare and courtyard for the various aspects of the development.

This courtyard is lined with thick wood columns that support overhangs shading glass storefronts. It narrows on one end creating a series of more enclosed spaces that resemble city streets. 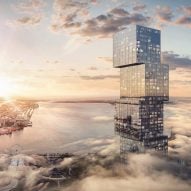 Throughout, wooden shutters will be used to further shade the glass floor-to-ceiling glazing on the store and office windows of the first two floors. An open walkway will crown the second floor, providing views of the public areas below.

Though the courtyard opens up the public aspects of the development, the upper floors will be more private and set back from the ground level.

"From a pedestrian vantage point, the building is perceived as a series of two-story structures organized around planted courtyards," said Herzog & de Meuron.

"The project brings a human scale and a sense of domestic comfort to all - instead of a singular uniform gesture, the project is a complex sum of its many individual parts."

Herzog and de Meuron was founded in 1978 in Basel. The studio's other US projects include a Jenga-like tower in New York City as well as an in-progress conversion of a powerplant in San Francisco into an office complex.