A mountain-like angular skyscraper with jagged peaks named Valley, which was designed by Dutch studio MVRDV, has officially opened in Amsterdam, the Netherlands.

The 75,000-square-meter development in Amsterdam's Zuidas district was designed for real estate developer EDGE and contains 200 apartments along with offices and restaurants.

The 100-metre-high building was designed as a "symphony of life", according to MVRDV founding partner Winy Maas.

"How do you make an office district liveable?" Maas said. "What should the homes be like? What else is needed? Those were the questions we started with when we designed Valley."

"Instead of a one-note business centre, this site along Beethovenstraat in Amsterdam is now a symphony of life – people working, yes, but also barbecuing on their terraces, visitors relaxing in the valley, shopping in the grotto, eating dinner by the street, and even the window cleaners and the gardeners scaling the heights above," he added.

"Valley is a first step towards transforming this part of Amsterdam into a greener, denser, and more human city."

The high-rise is composed of three connected towers of different heights that rise from a podium structure. Each of the towers has a largerly glazed facade and a contrasting facade containing a multitude of terraces and balconies that overlap one another.

Custom digital tools were used to make sure each apartment had enough light while creating a seemingly random pattern from the balconies, which were clad in 40,000 stone tiles. 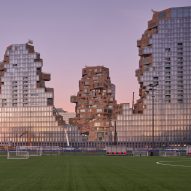 Valley by MVRDV photographed near completion in Amsterdam

Garden designer Piet Oudolf worked with MVRDV on the building, which has 370 planting areas spread out over 27 floors and used around 13,500 plants.

The largely residential tower is located in the Zuidas district, where the majority of buildings are offices.

"This part of Amsterdam is currently transitioning from being a solely business district to a more dynamic part of the city, bringing residential homes and various facilities," said Reinier van Dantzig, alderman for housing and development for the municipality of Amsterdam.

"This exceptional building is a great example to showcase what is possible in terms of high quality and sustainable housing in the Netherlands," he added.  "And I'm delighted to see it as a beautiful addition to the skyline of Amsterdam."

The building, which was officially opened on 16 September, has taken four years to construct and saw the first tenants move in at the end of last year.

MVRDV is designing another jagged high-rise. Named the Oasis Towers, the development in China will be formed from two skyscrapers with cliff-like facades. The studio also recently unveiled the design a building modelled on a bust of Albania's national hero.

The photography is courtesy of EDGE.