Named Oasis Towers, the mixed-use residential and commercial development comprises two 150-metre tall skyscrapers and is set to be built on a site at the edge of Nanjing's Jiangbei New Area Financial District.

The development will occupy two neighbouring blocks of the Jiangbei New Area masterplan, which is to become a new financial centre and hub for Nanjing, and incorporate two L-shaped, 40-storey towers that surround an "oasis" at the centre of the site.

"The contemporary architecture of Nanjing takes its inspiration from nature in form and appearance," said MVRDV co-founder Winy Maas.

"With Oasis Towers we wanted to push this trend to the max – not only emulating nature with curving, stratified 'cliffs' but also to literally incorporate nature into the design with the greenery and by tapping into natural processes."

Each of the towers will be built on opposite corners of the blocks in order to take advantage of prevailing western winds that will maximise ventilation to the site, according to the studio.

A formal, gridded facade will decorate the outward, perimeter-facing skins of the towers while the inward-facing facades will feature rippling and cascading terraces oriented toward a public shopping plaza.

Terraces, which will be clad in recycled bamboo and covered in trees, shrubs and greenery, will taper into the perimeter of the site forming a three-storey envelope surrounding the "oasis" and park-like space at its centre.

Renders of the project detail a sunken plaza positioned beneath the road that divides the two blocks providing visitors with an easily accessible crossing point as well as access to a metro station located beneath the towers.

Shopping and commercial floors will be placed within and between its ground and third floors, with convenient access to the site's park, while residential areas will occupy the upper floors. 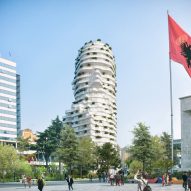 "This park-like space has a number of functions: it provides cooling and biodiversity, the canopy offers privacy by shielding the residents of the upper floors from the shoppers below, and it creates a walkable environment that connects the two plots across the central road," said MVRDV.

Curving balconies will differentiate the otherwise identical towers, with every floor different in its curving shape to those below.

Across the residential levels, planters and shrubbery will divide resident balconies.

Greenery will play a part in Oasis Towers' sustainability efforts, with trees and plants helping to shade and cool the site in warmer months and rooftop reed beds used to filter and clean water as part of a greywater recycling system.

MVRDV is an architecture studio that was founded in Rotterdam in 1993. The studio recently began construction on a mixed-use building in Tirana, which it modelled on a bust of prominent historical figure Gjergj Kastrioti.

Earlier this year the studio revealed plans to convert Herman Hertzberger's 1970s Centraal Beheer building in the Netherlands into a residential district into over 650 homes.

The visuals are courtesy of MVRDV.