Located in the village of Mekarwangi, Piyandeling Artisan House, which has been shortlisted in the rural house category of Dezeen Awards 2022, combines a three-bedroom home with an open-air meeting hall and facilities for the local community.

On foundations of stone sourced from a nearby river, a structure of bunched bamboo columns and bamboo grid floors was used to build the cluster of structures, which are topped with roofs covered in thatched nipa palm leaves.

Throughout, various types of bamboo have been integrated into the structures, from the frame itself through to the floor and ceiling finishes, balustrades, window frames, decorative carvings and even door handles.

RAW Architecture worked directly with local craftspeople to construct the building, using bamboo sourced from local villages, which was then engineered on-site.

"[The project] aims to deconstruct the public perception of bamboo's craftsmanship as 'poor man's timber'," said the practice.

"This creativity brings an approach that focuses on solutions that are easy to maintain, easy to construct and efficient in terms of building budgets," it continued.

"The idea is creating finishes that are raw, basic, humble and honest in the expression and forming of such economic sensitivity." 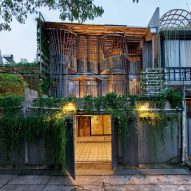 The lower level of the meeting pavilion has been left completely open to the surrounding landscape, while above walls covered with an open bamboo grid shelter the interior and an undulating bamboo balustrade articulate its edges.

Inside the dwelling structure, the bamboo structure is surrounded by an outer skin of plastic panels – recycled from a previous pavilion project by the practice – to provide this taller volume with greater protection against the rain and wind.

"The cylindrical shape was chosen as a protection strategy against strong winds coming from the north, so that the building functions to transfer and slow down the wind speed," said the studio.

"The playful balustrade of bent bamboo is a more elaborated hyperboloid form; stronger, more flexible, and creating a silhouette of the natural movement of birds of the movement of kujang, a traditional weapon in the Sunda tradition," it continued.

Smaller spaces containing studios, a bookshop and a dentist space sit alongside these volumes, and underground a skylit, concrete prayer room has been cast from bamboo formwork to create textured, fluted walls.

Many of the bamboo techniques used for Puyandeling Artisan House have been developed through RAW Architecture's previous projects, including a studio for the practice itself in Jakarta and a school building on stilts in Tangerang city.

The photography is by Eric Dinardi.