Architecture studio MAD Architects has completed a sinuous concrete stadium embedded into the ground and covered in grass roofs in Quzhou, China.

Conceived as "a piece of land art", the 33,731-square-metre stadium will seat 30,000 people. Its interior, described by MAD Architects as "crater-like," has undulating seating that was designed to follow that of the surrounding landscape.

Seating in various green hues also references the surrounding hills and is designed to contrast the stadium's white canopy.

Located in Quzhou, a city 400 kilometres southwest of Shanghai that is surrounded by forests, Quzhou Stadium is at the centre of the Quzhou Sports Park, which is currently under construction and will span close to 700,000 square metres.

It will be "the largest earth-sheltered complex in the world," said MAD Architects, the studio led by architect Ma Yansong.

While it is partly sunk into the ground, Quzhou Stadium's shape was created in reference to a mountain ridge that can be seen from the site and also nods to more far-away places.

"Its landscape evokes those of planets imagined by visionary science fiction authors," the studio said.

The stadium has a sloping facade with nine entrances and is supported by 60 columns made from locally-produced concrete.

MAD designed the entrances to the building with double-curved surfaces that appear to "ripple like ocean waves", while the walls are made from textured wood-grained concrete sheets. 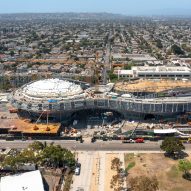 Above the stadium sits a long canopy made from self-supporting steel.

Its lower half is wrapped in a light-transmitting synthetic polymer PTFE membrane with micro-perforations that help to enhance acoustics and the top of it is made from a more solid and rain-proof PTFE membrane.

Quzhou Stadium's arena and seating are located above ground, but the majority of the building's facilities, including its parking garage, can be found inside the undulating hill from which it emerges.

MAD designed the building with large openings that let light into those underground spaces. The stadium has also been engineered to "absorb, store and infiltrate rainwater," which the studio says will both protect it from rain damage and reduce its energy consumption and temperature fluctuations.

Outside the stadium, signage was made from metal and stone and embedded into the ground to blend into the surroundings. MAD hopes its design of Quzhou Stadium will make it hard to tell where the landscape ends and the building starts.

"MAD Architects considers the stadium grounds as not only a dynamic park space adjacent to the city's urban center amenable to athletic and leisurely recreation, but also an opportunity for a spiritual connection between people and nature," the studio said.

"For Ma Yansong, the Quzhou stadium breaks away from the conventional sports architecture," the studio added. "It is conceived as a piece of land art that submerges itself into the nature and welcomes everyone to gather and share the sports spirit."

Quzhou Stadium is the first completed construction stage of the Quzhou Sports Park, which will be constructed in two stages and also include a 10,000-seat gymnasium, a science and technology museum, a 2,000-seat natatorium, hotels, a youth centre and retail programs.

Other recent projects by MAD Architects include the Lucas Museum, which is currently under construction in Los Angeles, and its first social housing project in China.

The photography is by CreatAR Images.