London studio Henley Halebrown has used a palette of reddish-brown concrete and bricks to visually tie together a school and housing in this mixed-use scheme in Hackney, which is one of six projects shortlisted for this year's RIBA Stirling Prize.

Located on the busy Kingsland Road at the edge of the De Beauvoir conservation area, the scheme combines Hackney New Primary School with shops and a residential tower with 68 apartments for not-for-profit housing charity Dolphin Living.

As well as being shortlisted for the Stirling Prize, the project has also been shortlisted for this year's Neave Brown Award for Housing, an award established by the RIBA in 2020 to recognise the UK's best new affordable housing projects.

Described by Henley Halebrown as a "hybrid building", the 11-storey tower and three-storey school are unified by an earthy-red colour palette that also gives them a distinct urban character.

"It represents an exemplary approach to hybrid architecture, combining different functions without losing the strengths of either the original educational or residential bulling typologies," explained the studio.

The school, which is organised around a large courtyard, is placed at the back of the site to ensure it is shielded from the noise of the road by the residential tower.

This courtyard is lined with ivory-coloured glazed bricks that contrast the exterior and features a reddish-brown playing field. It is overlooked by classrooms and a first-floor terrace that have been designed to encourage outdoor teaching.

"Designed around a cloistered courtyard, the school has an inner-city character," said Henley Halebrown.

"In addition to other semi-covered spaces and deep classroom window recesses, these bring the school's walls to life, allowing pupils to inhabit them as a liminal threshold between formal and informal worlds or indoor and outdoor spaces," it continued. 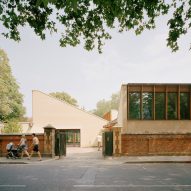 The apartment tower, named 333 Kingsland Road, sits above a base of commercial units that are wrapped by concrete columns to form a loggia.

On the edges of the tower are balconies for residents, while at the top there is an open colonnade that encloses a communal roof terrace.

"The adjacent residential tower reads as both a landmark for the development as a whole and as a Central European-type apartment block, with its covered loggia at street level," said the studio.

Earlier this year, Henley Halebrown also completed the retrofit of a 20th-century warehouse in north London into a series of Bauhaus-informed flexible office spaces.

This year's Stirling Prize shortlist is dominated by projects in London, with others including Sands End Arts and Community Centre by Mæ Architects and Orchard Gardens by Panter Hudspith Architects.

The projects are being featured on Dezeen this week ahead of the winning project's reveal next week at RIBA's London headquarters.