Frieze co-founder Matthew Slotover, developer Gabriel Chipperfield and artist Tom Gidley have teamed up with Fleet Architects to turn a partially collapsed building in Kent, England, into a 14-room hotel.

The building has had the same name since 1820 when it first opened as a boarding house. But it was on the verge of ruin when Slotover, Chipperfield and Gidley bought it at auction four years ago.

London-based Fleet Architects helped the trio replan the interior, which now contains a ground-floor restaurant, a two-storey basement bar and a roof terrace offering 360-degree views of the town and coastline.

The owners oversaw the interior design themselves. The ambition, according to Gidley, was to pay tribute to the building's history while offering a sense of homeliness.

"We wanted to make it feel somewhere between a house and a hotel," he told Dezeen.

Guest rooms can be found on the building's reconstructed first and second floors, as well as on the newly added third floor.

The focal point of each room, aside from the bed, is a bespoke gridded vanity unit crafted from wood and inlaid with marble.

The aesthetic is softened by the addition of period furniture pieces, curtains in linen or felt, and a selection of vintage artworks.

"Early on, I proposed the idea that I would simply buy pictures that I liked the look of, in the way that boarding house and small hotel owners have always done," said Gidley. 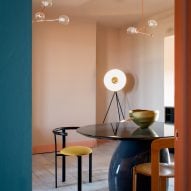 This concept extends to the hallways, which are decorated with seaside memorabilia, vintage photographs, old postcards and antique maps.

The scene changes in the downstairs spaces. Here, Gidley and Slotover have used their art-world connections to secure pieces by a range of celebrated contemporary artists.

In the joint restaurant and reception – characterised by a herringbone-pattern floor and a bright green tiled bar – small-scale paintings by various artists hang on soft-green panelled walls.

A corridor leading down to the basement is brought to life with a mural by London-based painter Sophie Von Hellermann, while a neon piece by Tracey Emin is one of several artworks on show in the two-level basement bar.

"Everybody has loaned works for a variety of lengths of time, so now and again something will change," said Gidley.

Fort Road Hotel is the latest of several buildings to put Margate on the map as a hotspot for contemporary art.

Since the 2011 opening of the Turner Contemporary gallery – designed by Gabriel Chipperfield's father David Chipperfield – London-based artists including Emin have increasingly been relocating to the area in search of more affordable studio space.

Gidley hopes the trio's sensitive approach to the building's history means the hotel will be just as valued by locals as by art lovers.

"I think we've created something very attractive that adds to the appeal of the town and reflects its history," he added.