Called Matopos, the home designed for the gallerist Judith Neilson involved a complete overhaul of an existing structure on the 178-square-metre corner plot, which overlooks a beach in the Sydney suburb of Freshwater.

In order to better connect the home's interiors with the surrounding landscape, its new upper storey features a series of deep window reveals, creating a large window box in the bedroom looking out across the beach and sea.

"The existing building didn't celebrate its relationship with its breathtaking surroundings... we sought to open the interiors to very focused views and create a material palette that spoke to its location," said the studio.

"Thoughtfully placed windows frame vistas of the sea, while polished plaster interior walls reflect views of the blue and yellow hues of ocean and sand back into the home."

The material palette of the exterior was informed by a nearby statue of Duke Kahanamoku – a Hawaiian who popularised surfing in Australia in the early 20th century – made of bronze atop a stone base.

Matopos' sandstone base creates a buffer between the home and the street, providing space for a garage and planters wrapping a more intimate lounge space on the lower ground floor.

Above, the ground floor is wrapped by thin grey bricks and contains a single large living, dining and kitchen area which opens onto a courtyard raised atop the stone base through sliding glass doors.

On the bronze-clad first floor, three bedrooms are arranged along the gently curving northeastern edge of the home, giving each a view out towards the sea. 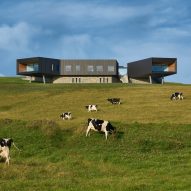 While the exterior celebrates material contrasts, the interiors have been designed as a minimal backdrop to the client's furniture and art collection.

Areas of white polished plaster on the walls have been designed to reflect the sky and sea, and marble has been used to finish the bathrooms and kitchen countertops.

"The details are intensely restrained, orchestrated as such to provide a sanctuary away from the city for the owner," said the practice.

"In all its simplicity, the home is not devoid of playfulness. The lower level comes complete with its own Tapestry Room, which welcomes visitors with three large-scale woven artworks and a lightbox-like treatment to the ceiling," it continued.

Andy Carson founded Atelier Andy Carson in Sydney in 2015. Previous projects by the practice included a home for the family Judith Nielson's daughter on a farmland site, with a cantilevering upper floor looking out to sea.

The photography is by Felix Forest unless stated otherwise.