South Korean studio Unseenbird has designed a cafe in downtown Seoul, where vegetables are grown in a glass-fronted cultivation room before being harvested, prepared and served to customers on a conveyor belt.

Sik Mul Sung cafe was set up by agri-tech start-up N.Thing, which also runs a vertical farm on the outskirts of Seoul, to make the company's technology tangible and accessible to everyday consumers.

Local practice Unseenbird was tasked with designing the cafe's interior and wrapped large portions of its walls, counters and fixtures in sheets of stainless steel.

This is contrasted with decorative red rocks and a floor made of matching pebbles, in a reference to N.Thing's ambition to build a vertical farm on Mars.

The cafe's space-age theme is also reflected in its futuristic green perspex surfaces, which are played off against textured plaster walls.

Sik Mul Sung's focal point is a brightly lit, glass-fronted cultivation room where rows of vegetables grow in a vertical farming system designed by N.Thing, which can function without sunlight or soil.

When customers place an order, the vegetables are harvested and used as ingredients for salads and ice cream.

Food is delivered to diners via a conveyor belt that circulates the cultivation room and runs along the curved bar.

The food itself is presented on circular plates that rotate to recall a planet in orbit. 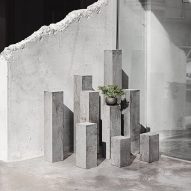 "Customers can feel the values and dreams of the company together by experiencing cultivation, harvesting, processing and consumption here," said Unseenbird.

"Not only was the characteristic applied functionally to the space but the brand identity was well realised with the finishing materials and tones."

Sik Mul Sung has been shortlisted in the small interiors category of this year's Dezeen Awards.

Other projects in the running include a serene timber and travertine reading room in Shanghai and a coffee shop in Shenyang, China, where stacked bottle-green beer crates form the furnishings.

The photography is by Yongjoon Choi.