The Paris 2024 Olympics and Paralympics has unveiled its mascots for the upcoming sports event in the form of two cartoon-style characters shaped like traditional Phrygian caps, which signified freedom during the French Revolution.

Called The Olympic Phryge and The Paralympic Phryge, the mascots feature googly blue eyes and red Phrygian caps for bodies.

The soft conical caps with bent apexes became a symbol of liberty during the French Revolution of 1789 to 1799, when they were worn by the revolutionaries.

Both Paris 2024 mascots have oversized eyelashes formed from recognisable French flags, while the Olympic mascot wears a pair of similarly decorated red, white and blue trainers.

The Paralympic Phryge sports a running blade attached to one of its legs and a red trainer on its other foot.

Described by Paris 2024 as "the golden duo", the mascots feature the sports event's logo emblazoned on their chests, and were created to "[inspire] France to get moving" ahead of the Games, which will be held in July and August 2024.

"At Paris 2024, we wanted mascots that would embody our vision and be able to share it with the French people and the world," said the president of Paris 2024, Tony Estanguet.

"Rather than an animal, our mascots represent an ideal. The Phrygian cap is a symbol of liberty. Since it is familiar to us and appears on our stamps and the pediments of our town halls, it also represents French identity and spirit," he added. 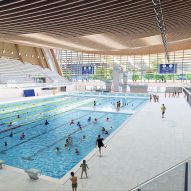 Cartoons have been released of "The Phryge Tribe" – clusters of Phryge mascots engaging in various Olympic and Paralympic sporting activities, flipping crepes and celebrating, as well as waving a French flag.

The mascots are available across a range of products that spans souvenirs, clothing and special edition plush toys for children.

"Courageous, stubborn and determined to succeed, the Olympic Phryge and the Paralympic Phryge have two years to show us that sport has the power to change everything and that it deserves pride of place in your society," said Paris 2024.

The first official Olympic mascot – a motivational object, animal or human that intends to represent good luck – was a dachshund called Waldo, which graphic designer Otl Aicher created for the 1972 Summer Olympics in Munich.

Previous Olympic and Paralympic mascots include Wenlock and Mandeville, the characters designed for the 2012 Games hosted in London.

The photography is by Benjamin Boccas.