A sculptural staircase, a courtyard and a glass pavilion make up a Montreal home by Atelier Pierre Thibault that was designed using principles from the surrounding architecture.

With a soft-hued brick and wood facade, the Resther Street Residence is located in Montreal's Plateau Mont-Royal neighbourhood, a popular residential area known for its amenities and walkability.

However, because exterior spiral staircases are no longer allowed under modern building codes, the studio decided to include one inside the larger home that connects its upper storeys.

Additionally, the building's third storey is stepped back from the street, in a way that allows the roofline to meet up with the abutting structure.

The home features a flipped layout, meaning that the resident's communal living spaces are located upstairs, connected by the central staircase.

The sculptural staircase has rich oak treads and a curved white bannister that snakes through the living spaces. It is lit by a large, edgeless skylight.

"[The staircase] is like a contemporary architectural ornament, designed as a focal point of the residence," said Atelier Pierre Thibault.

"It incites wandering, beckoning visitors to climb up and discover the living spaces located upstairs."

In the centre of the residence is a glass-walled courtyard with a tree, which is visible from the central shaft created by the staircase element.

The top floor of the home is designed as a glass-walled pavilion that acts as a mezzanine, offering varied perspectives of the surrounding neighbourhood and the lower levels of the home itself.

Here, the kitchen and dining room are located towards the front, while the living room is at the back.

Full-height curtains run around the perimeter of the space of the pavilion, creating diffuse light on the interiors.

There is also a terrace accessible from the pavilion. Other outdoor spaces are located on the courtyard level, which steps down to the basement. 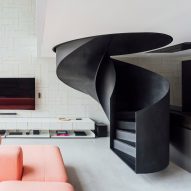 "The layout redefines the limit between exterior and interior spaces, inviting natural and man-made landscapes to enter the home," said the architecture studio.

A smaller residence also occupies the structure with the same height and a similar layout. It has one bedroom and a large back patio. The kitchen, living and dining room are laid out with an open-concept design, and a fireplace occupies one wall of the space.

Other homes by Atelier Pierre Thibault include a secondary residence by Quebec's Lac Brome made of wood and stone, and a wind-swept retreat on the Atlantic Coast that is lifted on stilts above its sandy site.

The photography is by Maxime Brouillet.