Traditional maritime construction and the harsh climate of Canada's Atlantic coast influenced the architecture studio Atelier Pierre Thibault's design of this house, which is raised on pilotis above a sandy site.

The Quebec City firm designed the low-slung Leblanc Residence for a rural plot that overlooks Canada's Northumberland Strait. It is located in Grand-Barachois, a remote village in the province of New-Brunswick.

It is elevated above the ground to allow for pools of water that gather around the house to flow underneath.Wooden planks clad the exterior and are painted white to help protect them from the sea air.

A long exterior deck that fronts the house, meanwhile, is left untreated so that it will turn to a silvery grey colour over time.

Atelier Pierre Thibault designed the home as two separate pavilions that are protected by a wide, overhanging roof – a form that is intended to blend in with the horizon beyond.

Steel columns supporting the roof are painted white to bolster them against the salty air's corrosive effects.

The first volume is more opaque and enclosed, and contains the residence's three bedrooms along a corridor. It also contains the main entrance, which features a glazed passageway that offers views to the ocean. 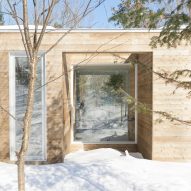 To protect the resident's privacy, the bedrooms have limited openings to the landscape. Instead, they overlook a courtyard between both halves of the homes, which includes an interior garden, and is built around a tree.

This contrasts the second pavilion, which is amply glazed and faces out towards the Atlantic Ocean. Three concrete steps lead from the entrance foyer to an open kitchen, living and dining room with expansive views of the maritime landscape.

"The connection between intimate spaces and living spaces is insured by exterior and interior walkways," said Atelier Pierre Thibault.

The communal spaces open out onto a wide deck, which is partially covered by the projecting roof structure. "The importance of this space is highlighted by the relative proportion of enclosed interior spaces to outdoor areas," the firm added.

The outdoor space benefits from a screened porch which occupies the eastern end of the terrace. A series of steps runs the entire length of the home to provide additional seating overlooking the panorama.

A simple palette features inside, where pale wooden furniture and bare white walls create a minimalist and restrained effect.

Atelier Pierre Thibault was founded by architect Pierre Thibault in 1988, and has completed a number of residences in rural areas of Canada. These include a home made of two symmetrical volumes that a pair of brothers share and a long narrow home in a Quebec forest.