A new hotel occupies a 1920s bank headquarters in Downtown LA, where Jaqui Seerman refreshed public spaces to include a botanical-themed lounge and a mirror-lined arched gallery.

Hotel Per La is housed in the neoclassical Giannini Building, built in 1922 as the headquarters for the Bank of Italy, and takes the place of the NoMad Los Angeles which closed its doors in March 2021.

Taken over by investment firm HN Capital Partners, its 10,000 square feet (930 square metres) of public and event spaces have been refreshed by local interior designer Jaqui Seerman, who used the 12-storey property's Italian connection to inform her updates.

"A nod to the building's storied beginning as a bank for the people, the 'Per La' name translates to 'for the' in Italian," said the hotel.

"[The bank's] founder, Amadeo Pietro Giannini, believed in the dignity and abilities of those commonly overlooked, signifying the hotel's inclusive spirit and name, essentially meaning 'for Los Angeles, and people like you'."

Demarcated by a pale blue awning, the hotel's entrance has been relocated from 7th Street to Olive Street, leaving the doric columns across the grand facade fully visible.

Through the doors, guests find themselves in a double-height lounge filled with plants and comfy chairs covered in botanical patterns.

An arched gallery lined with mirrors leads to the lobby, situated in what was once the main banking hall.

In the reception area, a custom-made curved plaster front desk influenced by linen fabric was designed by Voila Creative Studio, while a hand-painted tapestry that hangs in the niches behind was produced by LA muralist Jessalyn Brooks.

Event spaces range from a second-floor courtyard for private outdoor dinners, to larger spaces for up to 850 people.

Dining options within the hotel include Per L'Ora, which serves Italian cuisine and features a light colour palette across curvaceous design elements influenced by the early 2000s.

"The bar of the restaurant acts as a dramatic centerpiece, with a custom-made marble top in shades of green, grey, and white, and globe-shaped light fixtures, while custom white plasterwork on the front of the bar offers a new sense of texture," said the hotel operators. 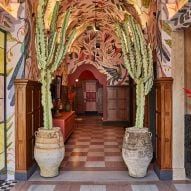 Adjacent to the restaurant is a casual cafe modelled on a Venetian coffee shop, serving beverages, pastries and snacks.

On the rooftop, Bar Clara offers cocktails for poolside lounging and hosts live performances with the LA skyline as a backdrop.

The 241 guest rooms and suites have retained much of the aesthetic created by French architect Jacques Garcia for the NoMad, referencing the restored gold and blue ceiling in the lobby.

Downtown LA, the city's most walkable neighbourhood, has experienced a cultural renaissance over the past decade.

The area is now home to several design-forward hotels including Kelly Wearstler's Proper – which was just named hotel and short-stay interior of the year at the 2022 Dezeen Awards – a Soho House, and an Ace Hotel.

Per La is the latest hotel in the US to open in a converted bank building, following the likes of The Durham in North Carolina and The Quoin in Wilmington, Delaware.

The photography is by The Ingalls.