US architecture studio GBBN preserved and expanded a 19th-century home in Erie, Pennsylvania into an educational facility with a glass bridge connection and metal-clad, barn-like structure.

Completed in April 2022 for Pennsylvania State University Behrend, the Federal House Renovation & Addition project saw the conversion of the oldest brick building in the Harborcreek Township into a modern educational facility.

Originally built in 1838 by cobbler Thomas Bonnell, the two-storey structure housed his 11-person family, served as a stagecoach stop and was later used as a safe house on the Underground Railroad.

The renovation and expansion by GBBN Pittsburgh preserved the original house and added a contemporary barn-shaped structure that mitigates the steep site.

The addition includes offices, classrooms and conference and event space for the program.

"What was once an unused, stand-alone structure on campus has become a place – a unique destination sought out by Penn State Behrend students and administrators," said GBBN principal Matthew Plecity.

The structure features two conceptual elements: the barn and the bridge.

The addition – known as The Barn – reinvents a gabled house archetype with a playful roofline and angled floor plate that wraps around a courtyard to preserve the site's existing trees. The Barn's height and proportions correspond to the original house.

"Ultimately, we wanted the Barn to complement the original structure – not replicate it," the studio said.

The barn envelope has a standing seam infinity roof that wraps around the eave and down the exterior wall.

The dark grey zinc panels reference the colour of the original roof and contrast the orange-hued brick, while large expanses of glass at the entrance and stairwell create "glowing beacons of activity" according to the studio.

The other element – The Bridge – connects the original Federal House with the addition.

The double-sided glass structure has a thin swooping roofline and lightly touches the original structure to preserve the house's visual outline.

"Glass provides transparency, and from the campus side of the project, people can see the façade of Federal House through the glass," the studio noted.

The facade design was softened by warm wooden materials and colours that mark the entrance and vertical circulation.

According to the studio, the wood elements serve two purposes – acting as a "jacket liner" for thermal insulation and maintaining the "homey feeling" of the historic structure.

The building wraps around an exterior courtyard to protect it from prevailing winds, snow drifts and adjacent busy streets, while the glazed addition affords staff members views of the young students in the courtyard. 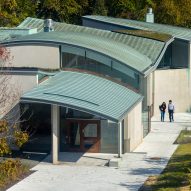 In addition to preserving the original structure, the studio repurposed a black walnut tree that had to be removed due to insect infestation into custom details within the project.

"We repurposed the tree into wood floors, fireplace mantles and a custom, live-edge, 20-foot conference table that is the heart of the renovated Federal House," the studio said.

Other similar additions include 1100 Architect's extension of a 19th-century stone house for the University of Pennsylvania in Philadelphia and Machado Silvetti's glazed addition to an 18th-century house owned by a signer of the Declaration of Independence in Virginia.

The photography is by Brad Feinknopf.