Architect Aurelien Chen has transformed a former miners' canteen in Handan, China, into a multipurpose cultural centre featuring interventions that respond to the building's communist heritage.

The canteen was built in the 1970s to serve workers at the Jinxing coal mine in China's Hebei Province.

It is surrounded by office buildings dating back to 1912 that were built by German architects and feature a distinctly Western aesthetic.

The local government engaged China State Construction Engineering Corporation (CSCEC) to oversee the sustainable renovation of the site, with Beijing-based Chen asked to head up the design team.

The site is designated as a tourist destination with a focus on representing China's evolution during the "Red Era", beginning with the founding of the Chinese Communist Party (CCP) in 1921 and culminating in the Cultural Revolution that took place from 1966-1976.

Following a historical survey of the site, it was determined that the early 20th-century buildings should be restored to their original condition.

Chen told Dezeen that he felt the canteen building should also be preserved as it complements the masterplan and style of the earlier structures.

He explained that the brief for the refurbishment was to emphasise and recreate architectural elements that had been lost over time or were in need of significant restoration.

"Instead of recreating a fake Red Era atmosphere, I preferred to keep the few historical traces that already existed within the building," said Chen.

"I developed the design and the space around them, attempting to subtly evoke the colours, materials and furniture of that time."

One of the most significant interventions is a flower-shaped, multipurpose furniture element located at the centre of the main hall.

The outline of this space, which can be used as an information desk, exhibition space, stage or relaxation area, evokes a typical Red Era pattern that was painted on the original ceiling. 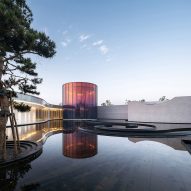 Other furniture in the versatile central hall includes wave-shaped benches and circular reading booths that are intended to provide a sense of fluidity and flexibility of use.

The circular reading spaces are inspired by the hall's original ceiling lights and incorporate integrated bookshelves to minimise their visual impact on the space.

Existing dilapidated internal walls were retained and became key features within the renovated spaces. A linear partition wall that was once the canteen's serving counter was transformed into a reading desk with lamps and high stools.

The bar area is located in a corner of the space and flanked by a concrete wall displaying Communist slogans painted in Chinese characters.

Chen wanted to incorporate arches into the design to echo details found on a neighbouring historic building. This was achieved by adding a row of booths with arched canopies to the restaurant area.

The booths also reference arched brick openings uncovered during the renovation process, as well as stone vaults discovered in the basement.

The vaults were preserved in their original state, with minimal interventions helping to transform them into reading corners and exhibition areas. A glass floor maintains a visual connection between these spaces and the public areas above.

Stairs leading to the basement were moved into an arch-shaped, metal-clad volume added to the facade. The external window openings were reshaped into arches that reference details found on the historic buildings nearby.

Chen explained that, although the number of significant heritage details within the building were limited, each one was carefully restored and used as the basis for additions that enhance the link to the past.

"I would say that new interventions tend to blend with the existing conditions, sometimes in a very immaterial way," the architect added. "Their shape and space derive directly from original elements, revealing them; the materials, however, are more in contrast."

Other recent cultural and leisure projects in China include a visitor centre with spiralling tiled roofs and the country's biggest library, which was designed by Danish studio Schmidt Hammer Lassen Architects.