The long-awaited Shanghai Library East designed by Danish studio Schmidt Hammer Lassen Architects has opened to the public in China.

The 115,000-square-metre Shanghai Library East, located in the Pudong district of Shanghai, is the biggest library in the country.

Schmidt Hammer Lassen designed its monumental shape in reference to a unique type of stone from the region, called Taihu stone, which has perforated surfaces and eroded hollows.

The stone is known as "scholars' rocks" and was widely used in Chinese gardens for centuries. It also features in ancient Chinese literature, which often referenced its shape-shifting look.

"This library was a unique opportunity to reinterpret a cherished Chinese symbol through architecture and design," said project architect Jing Lin.

"In ancient times, scholars would gather around Taihu stones, deriving inspiration from their edges, curvatures, canyons, and tunnels, which seemed to shift when viewed from different vantage points," she added.

"Similarly, as visitors move about Shanghai Library East, their views of its interconnecting spaces shapeshift."

SHL also designed the exterior of the seven-storey library to reference literature. Fifteen photographs of marble swirls were "printed" onto the facade's glass panels in homage to China's long history of printed literature.

The printed panels were designed with varying degrees of transparency to help allow more natural light into the building.

The main structure of the building is supported by two pavilions. Seen from afar, this makes the library's main volume appear to "float", as the pavilions at the bottom are covered by the trees in the adjacent Century Park.

One of the pavilions houses a 1,200-seat theatre, exhibition, and events space; the other is a children's library with a central courtyard and outdoor play spaces.

Bamboo, oak, and terrazzo were used to create a welcoming central atrium at the entrance of the building, which connects the library's seven levels.

SHL created stacking and interlocking different floors to ensure all floors are visible from the central atrium. The ground floor can be used to host events and exhibitions, and also holds a bookstore and a cafe.

According to Shanghai Library East, more than 80 per cent of the building's space is dedicated to community activity. 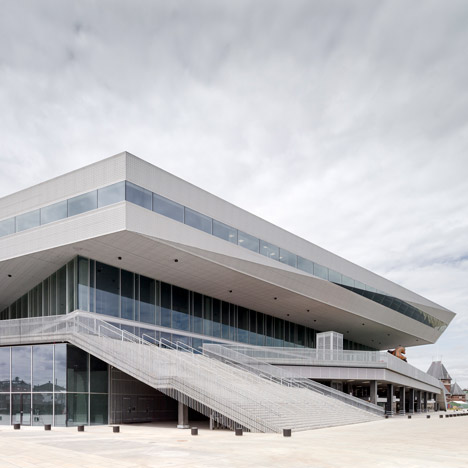 It estimates that the library will house over 1,200 events for more than four million visitors each year.

"This important cultural centre for the citizens of Shanghai embraces the idea of 'collection to connection' – a space to bring people together," said SHL design director and chief architect Chris Hardie.

Ten contemporary Chinese and international artists were invited to create site-specific permanent installations for the library centred around the theme of print, book or stone.

Among them is Bird, an installation created by Chinese artist Xu Bing for the third floor inside the main reading area of the building. It consists of 842 paper "birds" hanging from the ceiling as if flying towards the glass window facing the park.

The studio is currently working on several cultural projects in China, including two performing arts venues at Westbund Shanghai and a performing arts centre in Beijing.

The video and photography is by RawVision unless stated otherwise.