Prolific restaurant Dishoom has opened its first new London venue in five years, featuring an interior designed around a "financial fraudster from the 1970s".

As with previous venues, restaurant co-founders Shamil and Kavi Thakrar teamed up with architecture studio Macaulay Sinclair on the design of Dishoom Canary Wharf.

Referencing its setting near many of London's banking headquarters, the design imagines an Irani cafe near the Bombay Stock Exchange in 1970s India.

"When we create a Dishoom, we always start with a story," explained Shamil Thakrar.

"We imagined the fictional owner of the restaurant to be a financial fraudster from the 1970s who owns a cafe on Dalal Street, close to the Bombay Stock Exchange," he told Dezeen.

"This story gave us an opportunity to experiment with the aesthetic and feeling of the 1970s in Bombay, which, as you can imagine, has a rich history of financial intrigue."

Key to the design is the retro furnishings that feature throughout the 750-square-metre restaurant.

Vintage chairs, lighting fixtures and ornaments were sourced from antique dealers in Mumbai (formerly Bombay), carefully restored and shipped back to the UK.

"The procurement process for each Dishoom starts with the sourcing trip," said Ian Roome, associate director at Macaulay Sinclair.

One of the most important finds was a vintage diamond-shaped clock, which is set into bespoke joinery as the focal point of a grand bar that greets guests when they first arrive.

According to Roome, this element draws inspiration from the lobby clock in Mumbai's West End Hotel, which is located in the same neighbourhood as the Bombay Stock Exchange. 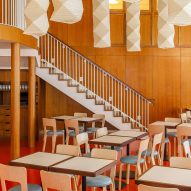 "The position of the 10-metre bar servery is, in our opinion, the key component in the restaurant," he told Dezeen.

"It creates an impressive focal point in the Permit Room bar, engaging with guests from all angles and viewpoints."

Rotating ceiling fans and rattan panelling – both Dishoom staples – also feature here, while the backdrop is a glossy teal wall that takes its cues from the Bombay Gymkhana.

"We researched 1970s Bombay extensively," said Roome, before reeling off a list of places in Mumbai's Fort area that were visited as part of the design process.

"They guide every single detail of the design aesthetic and tone," he said.

The dining spaces are more intimate in scale, set beneath a mezzanine-level kitchen.

These spaces are filled with texture, thanks to parquet and patterned-tile floors, panelled walls infilled with retro wallpaper, and a mix of wood and marble tabletops.

Seating upholstery comes in patterned fabric and leather in shades of green, yellow, brown and red. A family room sits off to one side, with colours that reference the stairwell of the Parsi Lying-In Hospital.

The Dishoom restaurants, which first launched in 2010, are based on the Irani cafes that were once widespread in Bombay but are now increasingly rare.

There are now six Dishooms in London, including one in a former transit shed near King's Cross station, plus outposts in Edinburgh, Birmingham and Manchester.

Shamil Thakrar explained the concept in a 2010 interview with Dezeen founder Marcus Fairs.

With Dishoom Canary Wharf, Thakrar hopes to have created a stronger sense of 1970s glamour than in any of the restaurants.

"It feels like one of the richest designs we've created," he said. "The room furthest back feels to me like the Air India first class lounge circa 1973, although I'm too young to remember this of course."

"I also love the artwork, which works again to reinforce the character and the time setting of the protagonist in our story."