Architect Tsukasa Ono designed this housing project on Japan's Yakushima island to have a positive impact on its natural setting, using a "regenerative" approach to improve the soil by promoting the growth of mycelium and bacteria.

Sumu Yakushima is a community created by eight co-owners and situated on a hillside site forming part of a farm with views towards the sea.

Tsukasa Ono told Dezeen that he and two friends developed the idea for the project in 2020 while Tokyo was in lockdown during the Covid-19 pandemic.

"We were temporarily living at my friend Yuki Imamura's hotel on Yakushima island," Ono recalled. "We started to make a concept for a small project but it was so exciting that the project kept getting bigger so we accepted some more good friends to join us."

Ono is the only architect in the community and was responsible for the design concept. Other members have different skills, including as project managers, financial consultants, environmental consultants and energy specialists.

"We talked a lot about ideas and discussed many times what our future life here would be like." Ono explained. "I think this project solves many aspects of today's problems on Earth."

The land the community is built on is owned by one of the members. The site and layout of the buildings were determined following a thorough appraisal of existing tree positions, water flow and other environmental factors.

The project seeks to minimise its impact on the land and uses a principle that Ono calls "regenerative architecture" to reframe the relationship between human habitation and nature.

This approach combines traditional Japanese civil engineering with contemporary technology to create buildings that adapt to their surroundings and contribute positively to the growth of plants and other organisms.

The buildings nestle among the existing trees and are elevated above the forest floor to promote the natural flow of air from the hills to the sea.

Wooden piles with charred surfaces are driven into the soil beneath the foundations of each building. The carbonised wood promotes the growth of mycelium (fungal threads), which encourages tree root growth and helps strengthen the soil.

Ono is a specialist in the use of bacteria and fungi in architecture and believes the proper implementation of these concepts can enrich nature, while also making buildings more robust and comfortable.

"Sumu's regenerative building method keeps the microorganisms in the soil alive," he points out, "and by activating the bacteria, the artificial building can connect with the natural network."

"By doing so, it is possible to help each other with the surrounding environment and change the environment more positively."

Ono also used a fermented plaster for the interior walls and floors that was made by mixing charcoal and a special type of bacteria. The plaster helps to create a stable internal environment by preventing mould and other putrefactive bacteria, according to the architect.

The Sumu Yakushima buildings feature comfortable living spaces that are airtight and highly insulated, minimising the need for artificial heating and cooling. All energy is generated by solar panels and stored in batteries, with local firewood used for heating and cooking. 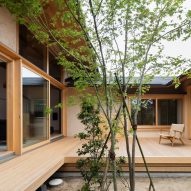 The buildings make use of local Yakushima cedar, which is richer in oil than cedar from other regions, making it durable and suitable for exterior use in Yakushima's rainy, humid climate.

The site plan comprises several cabins that are connected by outdoor paths. Some of the cabins contain communal facilities including the lounge, kitchen and dining area, while others are used for private accommodation.

Large outdoor decks allow the inhabitants to feel immersed in their surroundings, while the need to walk through the forest to perform activities like cooking or bathing enhances this connection with nature.

The co-operative's residents also adopt a "regenerative lifestyle", which involves activities such as collecting driftwood for use as firewood and clearing grass to improve the site's airflow.

Ono says these tasks create a stronger sense of community spirit, as well as helping the natural environment to flourish and mitigating any negative impacts from construction.

"Since the Industrial Revolution, humans have destroyed and consumed nature," the architect added.

"If this regenerative architecture spreads throughout the world, I believe that the global environment will recover at an astonishing speed. The most innovative idea is the change of architecture from negative impact to positive impact."

Other recent projects in the Japanese countryside include a Shigeru Ban restaurant made from thatch and cardboard and a holiday home by a national park.

The photography is courtesy of Tsukasa Ono.