The protesters, who numbered in their thousands, stormed the buildings, climbing roofs and breaking windows, reported UK newspaper The Independent.

Glass cabinets were smashed and fire extinguishers were set off in the National Congress, according to UK architecture publication Building Design.

Protesters reportedly stole objects from both the supreme court and the presidential palace and broke furniture, with videos on social media also showing fires inside the congress building, reported The Guardian.

The palaces, which are a UNESCO World Heritage Site, were designed by Niemeyer in the 1950s to 1960s as a part of his creation of the Brazilian capital. 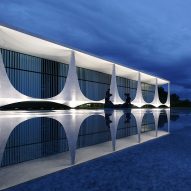 The riot, which US president Joe Biden called "an attack on democracy", was perpetrated by Bolsonaro supporters calling for the removal of newly elected Brazil president Luiz Inácio Lula da Silva, known as Lula.

Lula blamed Bolsonaro for the attack and stated that "anyone involved will be punished". At least 300 arrests have been made following the riot, which has been compared to the attack on the United States Capitol building on 6 January, 2021.

The attack on the government buildings came after a report last week by Brasilian TV channel GloboNews that the Palàcio da Alvorada, the official residence of Brazil's president, had been left damaged and with missing artworks after the departure of Bolsonaro.

Brazil's first lady, Janja Lulu da Silva, showed damaged carpets and torn sofas as well as broken windows during the video interview and said artworks have been damaged by the sun and some were missing.

The presidential couple now plans to renovate the palace and eventually open it for public tours.

The presidential residence made the news in 2017 when then-president Michel Temer, 76, and his wife Marcela, 33, left the building after sensing "bad energy" and fearing it could be haunted.

Plans to install anti-drone antennas on top of Planalto Palace as well as the Alvorado and Jaburu palaces were criticised by Brazil's national heritage institute in 2020, which said it would "directly impact" the iconic structures

The photograph of Planalto Palace is by Webysther.