The Autumn Winter 2023 menswear collection, which was created by designer Silvia Venturini Fendi, took place at Fendi's headquarters in Milan.

Informed by roller disco, the show included a large installation paired with custom disco music, which the brand explained transformed its headquarters into a giant pinball machine.

The installation was designed by Italian artist Vascellari, who previously collaborated with Fendi on its Spring Summer 2019 menswear collection, while the production was led by Bureau Betak.

The show took shape as a dramatically out-of-scale, metal pinball track that was suspended above and through the centre of the runway. 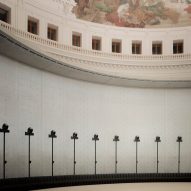 The large metal track twisted over two levels and extended over the audience until it began to lower at the model's entrance to the show space.

Shimmering lights flashed within the room to create the feel of a disco ball, while the muted blue hue of the runway was incorporated into the collection by Silvia Venturini Fendi.

"Celebrating the hallmarks of Fendi materiality, double-faced cashmere, engineered leathers and jacquard silks are illuminated by the disco ball hues of silver, indigo and violet," said the show notes.

The photography is courtesy of Fendi.