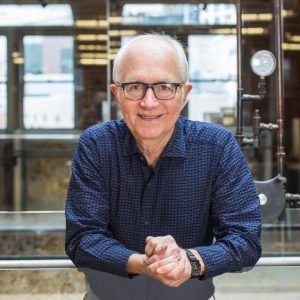 US architect Jim Olson founded Olson Kundig in 1966. With a career spanning six decades, Olson was recently involved in the Kirkland Museum of Fine & Decorative Art project and the Jordan Schnitzer Museum of Art at Washington State University.

Olson Kundig has recently renovated Seattle’s iconic Space Needle and unveiled a proposal for  The Bob Dylan Center, a museum in Oklahoma dedicated to the American singer, which is set to open in 2021. The practice aims to maintain a focus on the natural landscape in their residential projects, which include the Trout Lake Residence and Olson’s recent expansion of a forest cabin that he built as a teenager.

The architect’s renowned architecture portfolio has been the subject of four monographs, a travelling career retrospective and a solo exhibition. He became an honorary fellow of the AIA in 1990 and has consistently ranked within the top 100 architects and designers by Architectural Digest.