These clocks by London designer Lina Patsiou have spent time on the sun beds to tan patterns onto their leathery faces (+ slideshow).

While she was growing up, Greece-born Lina Patsiou noticed that her leather sandals turned darker after wearing them in the sun all summer, just like human skin. 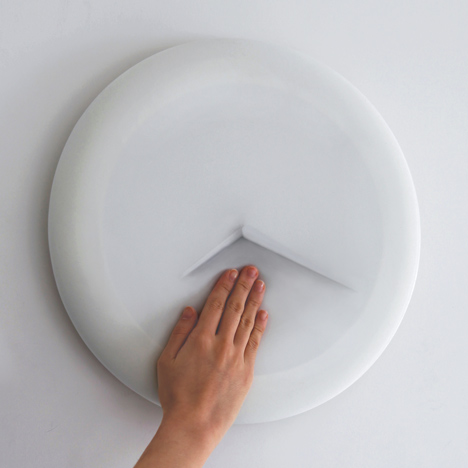 Now based in a part of Europe with less reliable weather, Patsiou wanted to see if she could created a similar effect via an artificial process.

"I was in London when I was developing the project and waiting for a sunny day to do some experimenting did not seem like a good idea," Patsiou told Dezeen. "So I thought to try with a solarium, even though I didn't really expect it to work. But it did!"

The Sunclocks collection features three different tanned designs. "Each pattern is inspired by a different manifestation of sunlight," said Patsiou.

The first is split down the middle, with one paler and one darker side. Another design is divided into four segments at the two, four, eight and 10 o'clock positions, with a more tanned section at the top and getting lighter towards the bottom.

The third features diagonal stripes in different shades, created to echo beams of sunlight filtering through the clouds.

To create the clocks she worked with a craftsman who cuts the cow's leather, which was produced in Italy and finished in Greece.

The leather is mounted onto computer numerically controlled (CNC) cut plywood circles, before being placed on the tanning bed.

Panels are placed over the sections of the dials to vary the amount of exposure the different areas receive.

"I ran my first experiments with a small lamp for facial tanning, but now I have my own solarium in my studio in Hackney," Patsiou said.

Before finalising the designs, she created samples to test the different shades that could be achieved with the technique.

"Obviously the melanin of the leather is limited, so there is a saturation point for the tanning," she explained.

Although the project focuses on the relationship between time and the sun, Patsiou told Dezeen that there is an element to the concept that carries a message about overexposure to UV radiation.

"There is definitely a side of the project that contemplates the use of the sun as a medium for beatification," she said. "Those tan lines on the clocks' dials are the product's sole decoration and they are created with a tool for artificial cosmetic tanning."

"If you combine that process with the fact that this material comes from a dead animal, yet tans to such dramatic effect, it's really rather unsettling," Patsiou added.