Dutch architect Erick van Egeraat has completed a waste incinerator and power plant in the Danish city of Roskilde with a spotty perforated facade that lights up at night as if there's a fire burning within (+ slideshow).

Erick van Egeraat, the architect behind the underground Drents Museum, won an international competition in 2008 to design a plant to incinerate waste, turning it into heat and electricity for Roskilde and the surrounding region.

The scale of the building – known as the Incineration Line – means it can become an instant landmark against the backdrop of the small city and the flat Danish landscape. The design aims to express its function and the cutting-edge sustainable technology used inside to convert waste into energy. 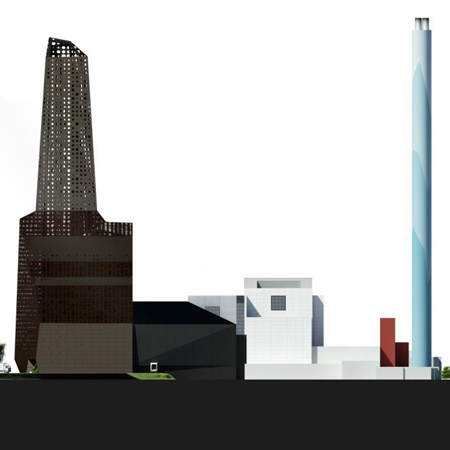 The stepped and angled lower portion of the building evokes the rooftops of the factories that surround the structure in its industrial setting.

A 97-metre spire towers above the landscape and wraps around the plant's chimney, creating a contemporary counterpoint to the steeples of the city's historic cathedral.

"Although almost 1,000 years apart, the cathedral's twin towers made of warmly coloured stone and brick, and the new iconic glowing incinerator, have now together become the novel guardians of the city's otherwise modest presence in the Skagerrag landscape," said Van Egeraat, whose past projects also include a mixed-use block with a corner that opens like a pair of curtains.

The plant's functional core is enveloped in a climatic barrier that is surrounded by a more expressive faceted skin made from umber-coloured aluminium plates.

A pattern of differently sized and spaced circular holes was laser cut into the panels and increases in density as it reaches the spire.

Lighting concealed behind this layer filters through the holes at night and the light sources can be individually programmed to create shifting patterns of colour.

"At night the backlit perforated facade transforms the incinerator into a gently glowing beacon – a symbol of the plant's energy production," said the architect.

"Several times an hour a spark of light will gradually grow into a burning flame that lights up the entire building. When the metaphorical fire ceases, the building falls back into a state of burning embers."

To ensure the light sources themselves are hidden, they are fixed to the outer skin and the light is reflected from the inner surface so it glows evenly through the perforated facade.