Inspired by dashboard bobbleheads and the figures of gods and deities seen in cars around the world, Matthew Plummer-Fernandez imagines a future where we each use a personal 3D-printed driving companion to communicate with our vehicles. 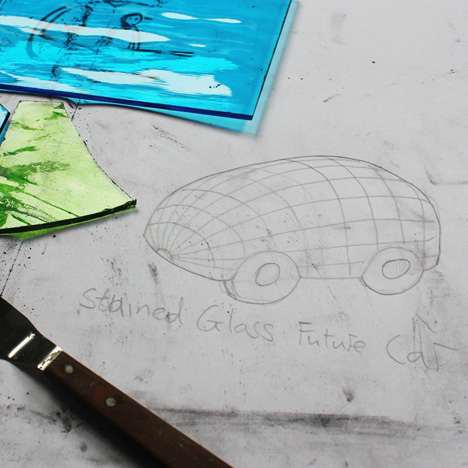 "My project is based on a future that heavily involves assistive personalised avatars for your vehicle," he explains. "These companions would sit with you to assist you with your driving."

Plummer-Fernandez is setting up a prototype avatar point of sale at the exhibition, where visitors will be able to have an figurine algorithmically generated for them based on information pulled from their Twitter feed.

"The installation will be an automated service for people to request these 3D-printable avatars," he explains. "I plan for visitors to be able to request an avatar through Twitter by following the bot account. The bot will respond with a piece that's generated just for them."

The installation will feature two screens, one that showcases the product and explains the service, and another on the back revealing the computer code required to generate the avatars.

People who use the service will receive a 3D-printable file on their phone, which they could then choose to get printed if they wanted.

"The system generates 3D-printable files, so all these artefacts that are Tweeted to you could actually be produced in a 3d print factory," Plummer-Fernandez explains. "And then you'd actually have a physical representation of this automaton."

He adds: "I hope [the installation] produces a sense of both delight and wonder. And maybe a bit of uncanniness."