News: structural work has completed on the Museum of Biodiversity in Panama – the first building in Latin America designed by Frank Gehry – ahead of its official opening in October (+ slideshow).

Occupying a site on the Amador Casueway at the entrance to the Panama Canal, the 4,000 square metre Biomuseo by Frank Gehry includes eight galleries, space for temporary exhibitions, a shop and a cafe. 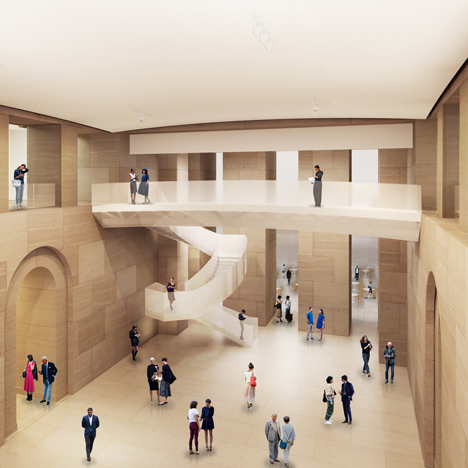 The colourful design is intended to represent the narrow land mass now known as Panama rising out of the sea to unite the drifting continents of north and south America three million years ago.

"This has been a very personal project for me," said Gehry. "I feel close ties to the people of Panama, and I believe strongly that we should all be trying to conserve biodiversity, which is threatened everywhere."

Gehry, who is best known for his sculptural cultural buildings including the Walt Disney Concert Hall in Los Angeles and the Guggenheim Bilbao is Spain, created a public outdoor atrium on the first floor as the centre piece of the design.

This atrium is covered by a series of angular metal canopies that vary in shape and are painted in bright colours.

"The canopies recall a local vernacular of tin roofs and colorful buildings and evoke Panamá’s spectacular Neotropical habitat, meanwhile offering protection from the area's frequent wind-driven rains," said the museum in a statement. "The atrium level offers extended views to the Canal and to Panamá City."

An outdoor exhibition space underneath this atrium connects the two main wings of the building.

Multidisciplinary designer Bruce Mau has designed the exhibitions, developed in collaboration with the Smithsonian Institute and the University of Panama, which focus on Panama's role in changing the biodiversity of the Americas and the climate of the rest of the planet.

Moving through the eight gallery spaces, visitors will be able to experience immersive installations before emerging into the botanic garden, which is also publicly accessible for local residents.

The project was funded by the Amador Foundation, a charitable organisation created by residents of Panama to promote the country's history and protect its environment. The site was donated by the Panama government.

A ceremonial dedication for the building will take place on 30 September, ahead of the public opening on 2 October.

"We are deeply grateful to Frank Gehry and his collaborator in design, Bruce Mau, for giving us a museum that so beautifully and effectively expresses the mission of Biomuseo," said the museum's director Victor Cucalón Imbert. "Thanks to this extraordinary project, we know that Biomuseo can become a cultural and eco-tourism destination, as well as a symbol of global concern for the environment and for conservation, enabling us to send our message throughout the world."

Photography is courtesy of Biomuseo.