To create the Booming Vases, white refractory ceramic clay is hand-formed into hollow geometric shapes and coloured slips are applied to the outside of the resulting blocks.

Gunpowder is placed inside and detonated while the fresh clay is still wet and therefore malleable, opening the top when it explodes. 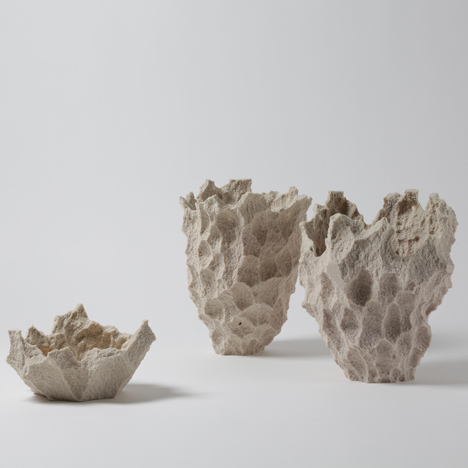 Else vases by Michal Fargo moulded from torn foam blocks

This transforms the column into a vase and reveals the white clay beneath the coloured slip. The pieces are then dried and fired following a more conventional ceramic process.

"We had the idea and with Alessio we found a way to make it feasible. He managed to use traditional ceramic processes in an unconventional way," the Analogia Project founders told Dezeen.

They collaborated with "master ceramist" Sarri, who has worked with Italian designers like Ettore Sottsass, Adolfo Natalini and Matteo Thun, to utilise his expertise with the material.

"Apart from the aesthetic formal result, we hope that people will be surprised when they see and hear how the vases are made," they said. "It is a new exploration of one of the most traditional hand-making processes, which we should not take for granted.”

The Booming Vases collection is on show at the Mint gallery, 2 North Terrace, Alexander Square, London SW3 2BA until 21 September to coincide with this year's London Design Festival.

The gallery is also displaying furniture made from natural materials suspended in resin, as part of an exhibition titled Elements of Craft.