News: a team led by Danish architecture firm COBE has seen off competition from three firms to land the commission for a new railway interchange in Køge, a town 28 miles south of Copenhagen.

The team envisions a transport hub for the 90,000 people passing through the area daily – bringing together high-speed trains, local railway and the motorway leading into Copenhagen from the south. 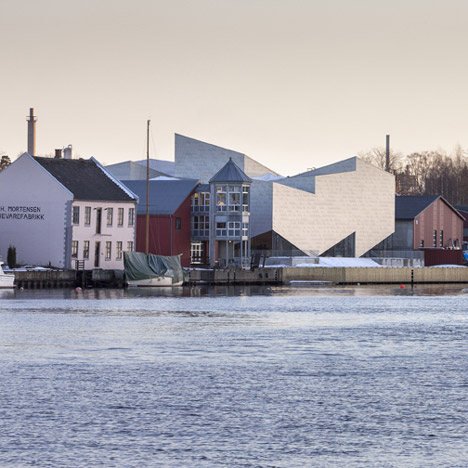 The scheme centres around a 225-metre-long pedestrian bridge that will stretch east to west across the existing motorway, as well as over the double-tracked rail line. There will also be an all-new station and an accompanying park and ride facility.

"We have designed a symbol of the development that the City of Køge is currently undergoing – a development characterised by innovation, pioneering spirit and audacity," said COBE founder and creative director Dan Stubbergaard.

"This development will be reflected and materialised in the bridge and the surrounding park and ride facility that besides being the traffic junction of the region, also will be a distinctive landmark for the area and a symbol of Denmark's strive towards a sustainable future," he said.

The bridge will be lined internally with wooden lamellae, designed to offer a tactile surface that is warm and welcoming for pedestrians.

Externally, the structure will be clad with perforated steel plates. The south facade will be covered, but the north facade will offer views out over the road and landscape beyond.

Furniture will be built into the bridge's interior, creating a space for visitors to take a rest from their journey and survey their surroundings.

"The difference between the open side in the north and the closed side in the south, gives room for both vista and intimacy, movement and repose, and contributes to the experience, atmosphere and joy of traveling," said Dissing+Weitling's Steen Savery Trojaborg.

The Køge North Station is set for completion in 2018, with the bridge construction taking place in short periods during the winters of 2016 and 2017. COWI engineer Jens Sandager Jensen said this influenced the choice of materials.

"We have chosen a construction of prefabricated steel units that can be transported directly to the construction site," he said.

COBE, whose past projects include a golden library and a curvy kindergarten, also recently unveiled its design for an extension to the Red Cross headquarters in Copenhagen.