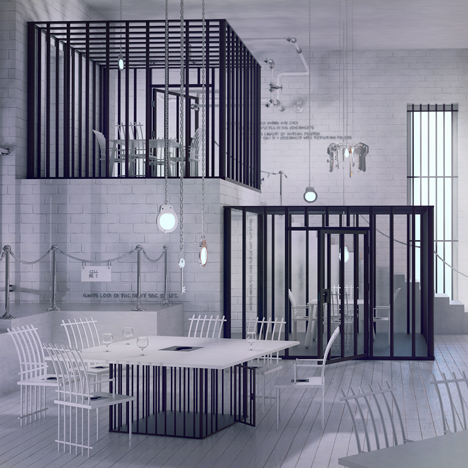 Imaginary restaurant designed like a prison by Karina Wiciak

The 475-square-metre cafe sits within the stone perimeter walls of the prison, which before it was decommissioned in 1997 boasted notorious criminal and crime novelist Chopper Read as one of its inmates.

"We wanted to respect its dark past as a prison, and we also wanted to breathe new life into the cafe for its patrons to enjoy."

"The theme of irreverence led us to play with ideas – ideas that created a contrast between dark bluestone walls and a palette of bright colours and blond timbers."

The timber framework creates a triangular pattern that spreads across the walls, ceiling and counter of the cafe.

Wedges between the struts are painted in shades of black, white, pink and blue, while black-painted lengths of timber pick out an irregular pattern on the suspended ceiling structure.

"This structure created a playful effect, one that brought the site to life and allowed it to move on from its dark past, as well as embrace a sense of fun for the future," said Biasol.

Nud Collection pendant lights, with blood-red flexes and sculptural bulbs by Plumen, hang in an L-shape formation over the wooden counter.

Over the tables, the brightly coloured cords are wrapped around the wooden ceiling trusses to decrease the length. Others are pulled taut around peg arrangements on the walls and behind a large wooden logo for the cafe behind the counter.

A slim shelf below the sign displays brown paper bags of coffee beans and potted plants with fronds that have begun to wind around the display.

By the serving counter, a wooden framework constructed around a concrete column forms shelving units and a trellis for further trailing plants, provided by local business Pop Plant.

Simple plywood stools and tables were designed for the space by the studio, and are positioned along the windows.

Photography is by Martina Gemmola.