Dutch design collective Studio Diip has added wheels and sensors to a fish tank so that its inhabitant can drive it by swimming in a certain direction (+ movie).

Fish on Wheels allows the aquatic occupant to move its contained environment around a space rather than remaining static. 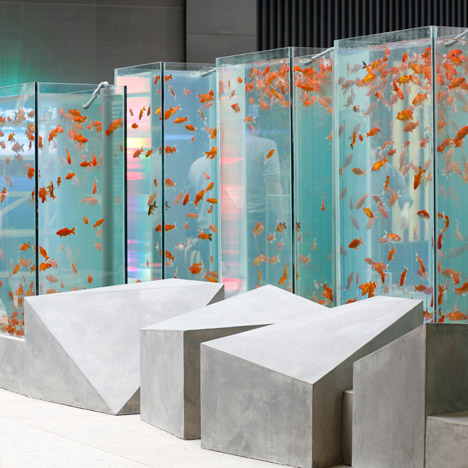 "Our pet fish have always been limited to their water holding area known as 'the fish tank'," said Studio Diip, composed of alumni from Eindhoven University. "In an attempt to liberate fish all over the world, the first self-driving car for fish has been developed."

The prototype tank they created is mounted on a robotic car with four wheels. The vehicle is controlled by an Arduino – a programmable microchip housed on a small circuit board.

As the fish swims around the transparent tank, a webcam positioned above the water tracks its movements – detecting the contrast between the fish and the bottom of the tank – and relays them to the Arduino.

The programmed chip then mimics the fish's movements by driving the vehicle in the same direction.

"This car moves by detecting the fish's position with computer vision," the designers said. "Up until now driving vehicles has been limited to mankind only (excluding a handful of autonomous vehicles driven by computers), but now your pet fish can also put the pedal to the metal."

A video demonstrating the prototype shows the vehicle moving in jolts as the fish quickly swims to the different edges of the tank.

The project was shown at this year's Dutch Design Week in Eindhoven last month, where a table with an integrated fish tank and bird cage was also presented.

An Arduino was recently acquired by New York's MoMA as one of five DIY electronics products added to the museum's collection of "humble masterpieces".

Driverless vehicles are a hot topic at the moment as a flurry of new proposals for autonomous cars, trains have been released over the past months – see our roundup of some of the most intriguing ideas.